Offensive operations carried out by Colombian Navy units against drug trafficking in the coast of Nariño, allowed the interdiction of a semi-submersible when it was sailing in Colombian waters manned by four individuals carrying four tons of cocaine.

This shipment of narcotics is the largest seized by the Colombian Navy at sea in the past two years.

With this blow, the largest one dealt by the Pacific Naval Force in the last two years, the trafficking and consumption of 10 million doses of the drug in countries of the region and the entry of close to 150 million dollars to the finances of the Farc dissident group “Bloque Occidental Alfonso Cano” was prevented.

With information from Naval Intelligence, units of the Coast Guard Station of Tumaco and a Maritime Patrol Aircraft of the Naval Aviation, deployed the interdiction operation 68 nautical miles from Tumaco, where the semi-submersible type naval device was intercepted, manned by four individuals, including a foreigner, who were moving towards the coast of Central America.

At the moment of inspecting the 15 meter long naval device, 200 sacks with 4,000 rectangular packages were found, apparently containing illicit substances, for which reason they were transferred to the dock of the Tumaco Coast Guard Station, where members of the Technical Investigation Corps of the Attorney General’s Office conducted a preliminary identification test, which was positive for cocaine hydrochloride.

With the interdiction of the naval device and the seizure of the shipment of narcotics, the finances of the dissident armed group of the FARC “Bloque Occidental Alfonso Cano”, which commits crimes under the criminal command of alias “Allende”, on the Pacific coast of Nariño, have been affected, reducing their logistical capacity to finance illegal mining activities and terrorist actions against the security forces and the civilian population, with which they seek to generate anxiety, displacement and destabilize the territories.

The four subjects were captured and placed at the disposal of the Prosecutor’s Office, where in hearings with the Judge of Control of Guarantees and the Prosecutor of the Specialized Directorate against Drug Trafficking, they were charged with the crimes of: trafficking, manufacture or carrying of narcotics; and use, construction, commercialization and possession of semi-submersibles or submersibles.

The Prosecutor’s Office also established that the foreigner is subject to an arrest warrant for extradition purposes, in response to a request from a district court in the United States for different charges related to drug trafficking.

This type of semi-submersible with diesel engines, valued at half a million dollars, has similar characteristics to the so-called “Hijo del Diablo”, seized by units of the Pacific Naval Force in February 2019, in Timbiquí – Cauca. Also, they have the capacity to transport up to five tons of narcotics, so it is commonly used by drug trafficking organizations to send larger quantities of illicit drugs to Mexican cartels.

It is worth mentioning that in September 2019, another semi-submersible was intercepted while sailing in the Colombian Pacific waters, in which three individuals were carrying eight tons of cocaine hydrochloride. The operation was carried out by the Colombian Navy, the Colombian Air Force and U.S. authorities.

The Colombian Navy will continue to deploy all its operational capabilities to counteract the criminal actions of the FARC dissidents who commit crimes in the southern Pacific region of Nariño, ratifying its commitment to the protection of the national territory and the welfare of all Colombians, while inviting the entire community to provide information to prevent the illegal use of the waters under its jurisdiction, through the 146 and 147 lines available 24 hours a day.

Naval News Staff 29 Sep 2022
Damen signed a contract with COTECMAR on September 27, 2022, for the joint development of the contract design for the Colombian Navy's future frigate... 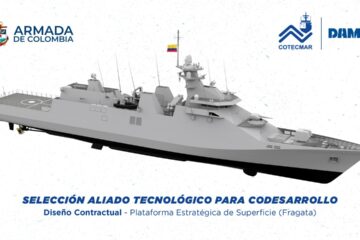 Tayfun Ozberk 23 Sep 2022
Damen shipyard will sign a contract with COTECMAR to jointly develop the design for the first Colombian frigate. 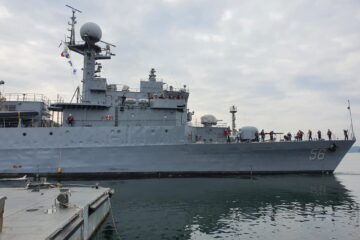 Xavier Vavasseur 04 Oct 2020
ARC “Almirante Tono”, a Pohang-class corvette, departed Jinhae Naval Base in South Korea to begin its journey home. Its first port of call will be Guam before arriving at the Cartagena Naval Base, where the vessels will join the Caribbean Naval Force to contribute to the reinforcement of the Colombian Navy fleet.