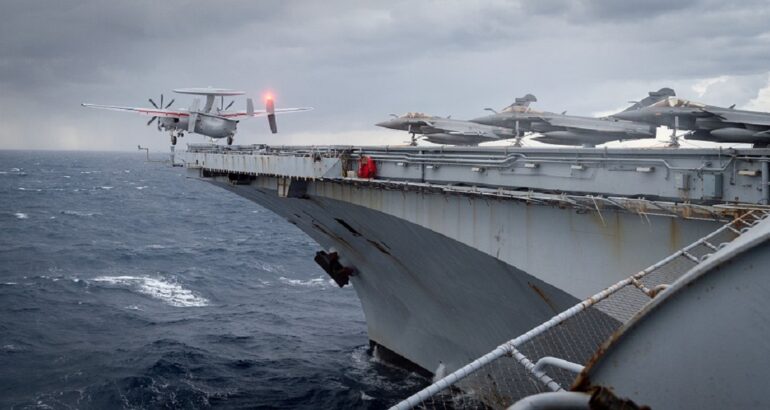 The French aircraft carrier Charles de Gaulle and its strike group are being retasked to support NATO following the invasion of Ukraine by Russian forces. The French CSG which is currently deployed in the Eastern Mediterranean Sea as part of the "CLEMENCEAU 22" mission began a logistics stop in Cyprus. It will then be reassigned to assist NATO a French Navy (Marine Nationale) spokesman told Naval News.

The “Clemenceau 22” mission started on February 1st. As we previously reported, the deployment’s focus is on the Mediterranean region but some of the assets (a frigate and some fighters) were set to deploy in the Black Sea.

The French Navy told Naval News that this has now changed. Air Defense FREMM Frigate Alsace, the latest addition to the French Navy fleet, was expected to transit to the Black Sea to conduct interactions with the Romanian Navy. This plan has now been scrubbed “following the events which took place this week”.

Instead, the entire CSG is being retasked. Charles de Gaulle and its escort today started a logistics stop in Limassol, Cyprus. The CSG will then be assigned with the mission to support NATO partners. While the aircraft carrier can not transit to the Black Sea because of the Montreux Convention, its air wing will likely be tasked with patrolling the skies above and around the Black Sea, as well as supporting partners in the region such as Romania and Bulgaria. French Navy ATL2 Maritime Patrol Aircraft (MPA) are also based in Cyprus and could fly long range ISR missions or support directly the CSG.

Such support may be needed as a large Russian Navy presence has been observed earlier this week near Tartus in Syria, where a Russian Naval base is located. This is just roughly 60 nautical miles from Cyprus. The joint command of the French military already announced last week that Rafale M fighters were scrambled to escort Russian aircraft which were detected “as soon as they took off” from their based in Syria:

When it deployed from Toulon at the beginning of the month, the Charles de Gaulle CSG was composed of:

Had it not been for this retasking, Naval News understands that the French CSG would have spent more time supporting operation Inherent Resolve (International military intervention against ISIL in Iraq and Syria). Something which French Navy Rafale M fighters have been doing in the past couple of weeks…

NATO yesterday announced the activation of the NATO Response Force. France is currently commanding the Very High Readiness Joint Task Force (VJTF) and as such will deploy the spearhead element of VJTF: 500 troops to Romania. France said it would also deploy additional troops and aircraft in Estonia and fly air policing missions in Poland.

Meanwhile two French Navy Mistral-class LHDs have recently deployed, but these deployments were planned long ago and are not related to the invasion of Ukraine:

Update – The French Navy reached out to Naval News following the publication of this article to add the following details:

“We will adapt our tactical posture to take into account the aggressiveness of Russia at the strategic level. It is obvious to us that what is currently happening in Ukraine will have an impact in the Eastern Mediterranean”

The French Navy added that it is not looking at escalating tensions, but to prevent the risks of misunderstanding and misconception. To avoid such issues, the French Navy set up a direct line of communication between its Mediterranean Fleet Command (known as CECMED, in Toulon) and the Russian Forces command in Latakia, Syria.