Home» News»Polish Frigate Procurement: Type 31 vs MEKO A300 in Final 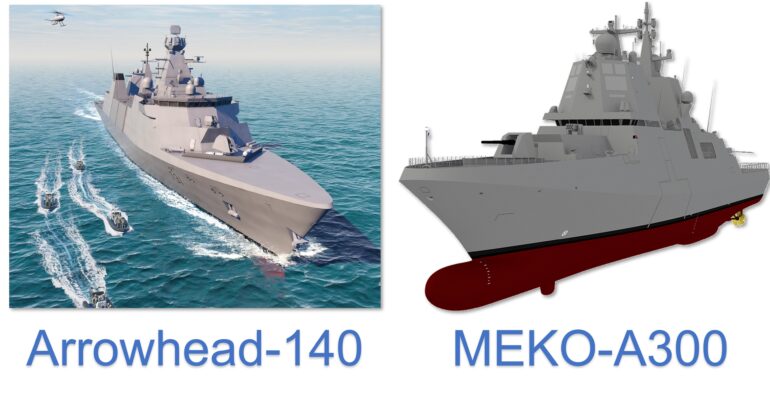 Polish Frigate Procurement: Type 31 vs MEKO A300 in Final

The Polish government announced on February 10 the down selection of two competitors for the Miecznik frigate programme: Babcock's Arrowhead-140PL and Thyssenkrupp Marine Systems' MEKO-A300PL. Both frigate design qualified for the final phase. Spanish shipbuilder Navantia with its F-100 design was not retained for the next phase.

Following the completion of the study phase for the procurement of three frigates, the Polish Ministry of Defense has chosen the designs of ThyssenKrupp Marine Systems (TKMS) and Babcock International for contract negotiations. During this phase, the Spanish Navantia F100 frigate offer was discarded.

The Polish Ministry of Defense stated in a press release that the evaluation was based on criteria such as tactical and technical parameters, combat potential, the possibility of unifying the acquired military equipment with the equipment currently owned by the Polish Armed Forces, as well as the life cycle costs of the proposed solutions and their potential for further modernization.

The most notable part of the announcement was that the proposals presented by German (TKMS) and British (Babcock) industrial partners scored within 5% of each other, which shows that the final phase of the negotiations would be tough.

Negotiations will then take place between the PGZ-MIECZNIK Consortium (Miecznik’s prime contractor) and foreign partners offering technologies for the ship’s structure and combat system. The final signing of the PGZ-MIECZNIK Consortium’s Business-to-Business contract with a foreign partner, the solution of which was indicated as the first-choice option, will be contingent on the final acquisition terms and costs.

If the parties can agree on the financial and other technical issues, the contract will be signed; otherwise, PGZ will negotiate with the latter.

A brief look over the finalists

As previously reported by Naval News, the MEKO-A300 is a heavily armed frigate with a unique design that ensures survivability as well as a good fighting capability in three domains: air, surface, and sub-surface.

Though the company did not reveal the ship’s key specifications, rumors circulating from the company’s offer to Greece suggest that the ship’s length will be around 125-130 meters, with a tonnage of around 5500 tons.

According to the information revealed by the company officials, the MEKO A-300 frigates will be armed with two VLS systems: a Mk 41 VLS 4×8 cells in the forward section, and a 36-cell VLS between masts launching air defence missiles in different ranges. The ships would be armed with 4 quad launchers for anti-ship and land-attack missiles, two triple 324 mm torpedo launchers will be deployed on the starboard and port sides to engage subsurface targets.

The main cannon is the 127mm Vulcano. 2 RAM launchers (carrying 21 missiles each) will be located for close-in missile defence. MEKO -A300 frigates will be capable to deploy sea mines, and 533 mm torpedo launchers in the mission module.

The sensor suite is yet to be disclosed.

There is no open-source information about Babcock’s offer for the Miecznik program, but available data indicates that the frigate will be based on the Arrowhead-140 design, dubbed Arrowhead-140PL.

The Inspiration-class frigates are the UK version of Type-31 frigates that are scheduled to replace the Royal Navy’s aging Type 23 general-purpose frigates. However, given its size (approximately 140m long and a displacement of more than 5,700t), the Type-31 is a relatively lightly armed asset. The main concerns of these ship outfitters are cost issues and getting the ships into service as soon as possible.

The baseline UK variant of Type 31 will come with up to 24 SeaCeptor and will be fitted for but not with Mk41 VLS. The ship will be armed with two Bofors 40 Mk4 small caliber guns and one Bofors 57 Mk3 medium caliber gun. Anti-ship missiles and ASW weapons will be absent from the UK version (except those in the helicopter).

The frigate can be outfitted with an open architecture combat system, bridge wing modules, and mission bays that can be configured in a variety of ways.

Will these ships meet the Polish demands?

According to a statement from the Polish Ministry of Defense, MIECZNIK ships will be outfitted with air defense systems, surface-to-surface and surface-to-ground weapon systems, and anti-submarine weapons. These units are expected to improve the Polish Navy’s capabilities in monitoring and controlling sea areas, defending sea bases, and combating surface, underwater, and air threats, as well as land targets.

Because of its location in the Baltic Sea, Russian submarines based in the Baltic fleet pose the most serious threat to the Polish Navy. This is a threat not only to Poland but also to other countries in the region. As a result, Baltic riparian countries have been attempting to improve their ASW capabilities, such as Sweden’s plans to improve the ASW capabilities of Visby-class corvettes in mid-life upgrades and Finland’s project to equip Hamina-class missile boats with torpedoes. As a result, MIECZNIK ships’ ASW capabilities are expected to be of high quality.

Because Babcock did not declare the specifications of the Arrowhead-140PL variant, comparing two designs would be unrealistic because the UK variant would not meet the Polish Navy’s needs, as previously stated. Because the Inspiration-class frigates will lack anti-ship missiles and ASW weapons, as well as relevant sensors. MEKO-A300 frigates, on the other hand, have excellent ASW capabilities due to their hull-mounted and towed-array sonars, lightweight torpedoes, and ability to house heavy torpedoes.

The Polish Navy does not have a big number of large combatants. As a result, the ships’ armament should not be inadequate. MEKO-A300 frigates meet and exceed Poland’s requirements. Despite the fact that officials provided no information about the cost of the MEKO-A300, it appears to be expensive.

The UK variant of the Arrowhead-140 appears to be a less expensive solution, but, while the details are unknown, Babcock’s Arrowhead-140PL offer is probably configured in accordance with Poland’s needs. As a result, the Arrowhead-140PL should be significantly more armed and more expensive than the UK variant. In accordance with the Polish MoD’s release that the difference between Babcock’s and the TKMS’s offer is only 5%, the TKMS offer may be a less armed variant of MEKO-A300 than the previously revealed configuration.

After the exact configurations of the ships, at least the primary weapons load, are revealed, it will be possible to make a more realistic comparison between the two designs, and their compatibility with the needs and ambitions of the Polish Navy.