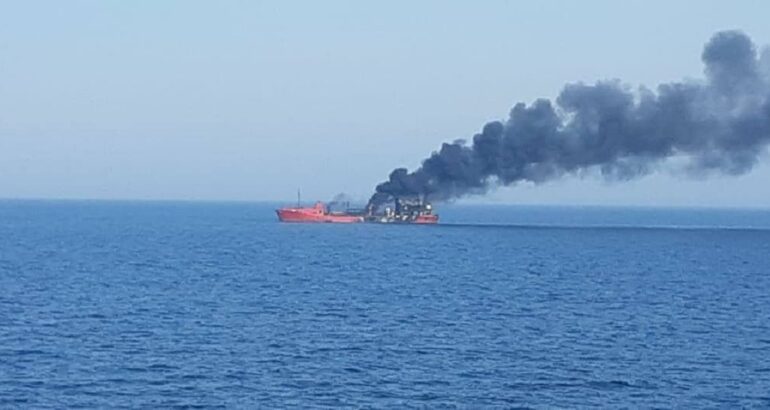 Ukraine's Ministry of Defence just reported that two commercial vessels were hit by Russian fire off the port of Odessa in Southern Ukraine. Panama flagged bulk carrier NAMURA QUEEN (IMO: 9841299) was reportedly struck by a missile while Moldova flagged bunker tanker MILLENNIUM SPIRIT was hit by at least one missile as well. Ukraine dispatched its coast guard to conduct search and rescue (SAR) operations.

According to the Ukrainian MoD statement, a missile hit the stern of the NAMURA QUEEN:

The ship under the flag of Panama was heading to the port of South to load grain. It is currently known that part of the equipment has been disabled. A fire broke out on the ship, a fire fighting tug boat was called. The tugboat “P&O STAR” has come to the rescue. The situation is under control.

In addition, according to the Commander-in-Chief of the Armed Forces of Ukraine, 12 kilometers from the port a Russian Federation vessel lined up the bunker MILLENNIUM SPIRIT (under the flag of Moldova):

According to the service of the port captain of the Odessa branch of the State Enterprise “AMPU”, missiles hit at 12:10 in the anchorage 355. The ship was carrying 600 tons of fuel oil and diesel on board […] There was a fire, which could, in the event of an explosion, lead to an environmental disaster. The crew jumped in the water and called for help.

Several vessels, including Ukrainian Coast Guard vessels were dispatched for the SAR operation. The bunker tanker was secured and anchored at 2:15 PM local time.

The naval agency of the republic of Moldova issued the following statement regarding the incident with the “MILLENNIUM SPIRIT”:

The Naval Agency of the Republic of Moldova informs that on February 25th, the maritime vessel MILLENIAL SPIRIT IMO Nr. 7392610 (Type Oil Tanker) under the flag of the Republic of Moldova being in the neutral waters of the Black Sea (46 ° 22.221’N, 031 ° 07.095’E) was hit by a missile (the source of the missile launch is unknown) [Ed. Note: The original language of the statement mentions a “shell” while its official English language version mentions a “missile”]. A fire broke out on board the vessel, the equipment and lifeboats were destroyed, the vessel’s crew left the vessel equipped only with life jackets.

Moldova authorities stressed that the source of the missile is unknown while Ukrainian MoD blamed Russian forces in both incident. For the record, Slava-class cruiser Moskva, the flagship of the Russian Black Sea Fleet was seen yesterday off Snake Island (Zmiinyi Island) located roughly 70 nautical miles south of Odessa. Moskva was apparently tasked with taking over the island, killing all 13 Ukrainian soldiers on the island. The soldiers are now known as the “heroes of Zmiinyi Island”.