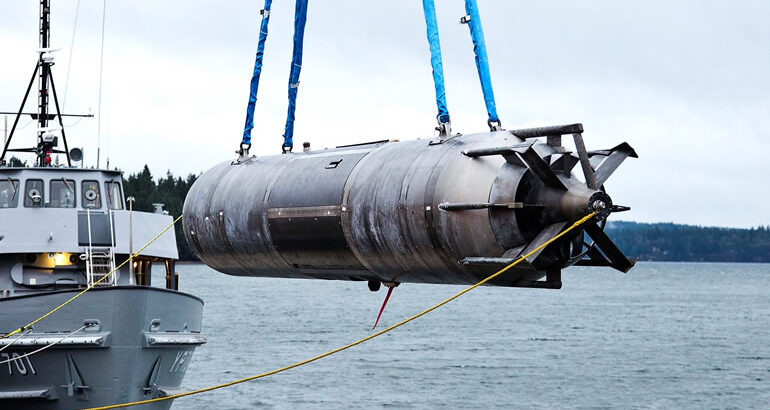 A surrogate Large Displacement Unmanned Undersea Vehicle (LDUUV) is submerged in the water in preparation for a test to demonstrate the capability of the Navy’s Common Control System (CCS) at the Naval Undersea Warfare Center Keyport in Puget Sound, Wash. in December 2015. US Navy Photo.

The Navy continues to invest in a family of unmanned undersea vehicles (UUVs) to meet the mission requirements for maintaining undersea domain superiority. Snakehead is the Navy’s largest submarine-launched UUV, providing increased endurance, depth capability, and payload capacity beyond small and medium UUVs.

NAVSEA issued a draft request for proposal (RFP) for the Snakehead LDUUV in October 2020.

The ‘Snakehead’ LDUUV will equip the Littoral Combat Ships (LCS) and provide Intelligence and Preparation of the Environment (IPOE) and Intelligence, Surveillance and Reconnaissance (ISR) capabilities. Naval News understands that the LDUUV is likely to be deployed from submarines as well. If that was confirmed, the LDUUV would be deployed from the Dry Deck Shelters (DDS) typically used for Swimmer Delivery Vehicles (SDV) since the Snakehead’s large diameter won’t fit in a standard torpedo tube (533 mm).

The U.S. Navy has released for the first time images showing the LDUUV: