A visualization of Babcock's Arrowhead-140PL design, which was chosen for Poland's Miecznik (Swordfish) frigate procurement program, was unveiled last week at a press conference hosted by the consortium PGZ MIECZNIK.

On April 8, PGZ Group (Polska Grupa Zbrojeniowa) unveiled the first drawing of the Arrowhead-140PL frigate, which is similar to the Royal Navy’s Type 31 frigates but optimized for Polish Navy requirements, at a press conference in Gdynia, Poland, to publicize the latest status of the project.

The photos from the conference indicate that it was a small-scale conference where primarily the systems of the future frigates, the infrastructure investments required for the implementation of the project, and the design features of the ships were presented by the project managers.

PGZ will collaborate with three main companies during the project:

Cezary Cierza, the director of the Miecznik Program, provided information about the project and an overview of its progress to date. Wojciech Nowodziński, project manager of the Miecznik program at PGZ Stocznia Wojenna, explained that they are still working on the preliminary design and the final design may have some differences according to the requirements of the Polish Navy.

“We must not forget that this is still a preliminary design phase. We have a technical project, working documentation, and some other things to do based on the needs. There is an ambitious schedule, needs and opportunities. We start working on the 3D model very early to reproduce the ship as well as possible and start a discussion about the next steps with all the partners and the customer. It is important that at an early stage of the design everyone can see what we are doing, make comments and just help with the process.”

The frigate’s armament appears to be in line with expectations. 4 quad SSM launchers with RBS-15 mk3/mk4 are mounted at various points on the ship. The Arrowhead140PL is equipped with a 32-cell VLS, and according to a March 4 announcement, MBDA will equip the Sea Ceptor air defence system with CAMM family missiles. Considering that one cell can hold four CAMM missiles, the maximum load of the VLS will be 128 CAMM missiles. The illustration also indicates that the new frigates will be armed with a 76-mm gun and a 35- mm gun. The ship will be capable of carrying and launching MU -90 torpedoes against submarine threats.

There is not much information about the sensor suit, but the image shows that the Miecznik frigate will be equipped with an SM-400 AESA S-band radar supported by an NS -50 rotating radar. The conferees indicate that CAPTAS variable depth sonar and a hull-mounted sonar will be equipped for ASW purposes.

According to the information gained from the Polish media, Paweł Lulewicz , President of PGZ Stocznia Wojenna, and Marcin Ryngwelski – President of Remontowa Shipbuilding spoke about how the shipyards united in the consortium have prepared for this task.

“As far as infrastructure investments are concerned, we are about to announce a tender to select a design firm to design our initial assumptions. We are talking about, among other things, the hull integration hall, a large part of which will be built at our partner, Remontowa Shipbuilding SA.”

“The integration of the ship equipment and systems should take place on the premises of PGZ Stocznia Wojenna. However, if necessary, we are ready to build the entire platform in our shipyard. Our goal is to support our colleagues from PGZ SA, who are leading the consortium, but we would also like to contribute our experience in managing a large program such as Kormoran or Tugboat.”

The infrastructure investment program at Remontowa Shipbuilding SA will start in the second quarter of 2022.

As Naval News previously reported, Babcock’s Arrowhead140 and TKMS’ MEKO A-300 were finalists for the program, and the PGZ consortium chose Babcock’s design. Construction of the first Miecznik frigate is scheduled to begin in August 2023. The three frigates will enter service in 2028, 2029 and 2031.

Martin Manaranche 04 Mar 2022
The PGZ MIECZNIK consortium has announced the signing of a strategic cooperation agreement with British industries (Babcock, Thales UK, MBDA UK) and therefore selected the Arrowhead 140 design for the future multipurpose frigates of the Polish Navy. 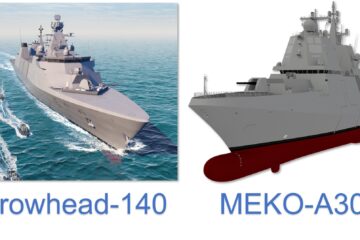 Polish Frigate Procurement: Type 31 vs MEKO A300 in Final