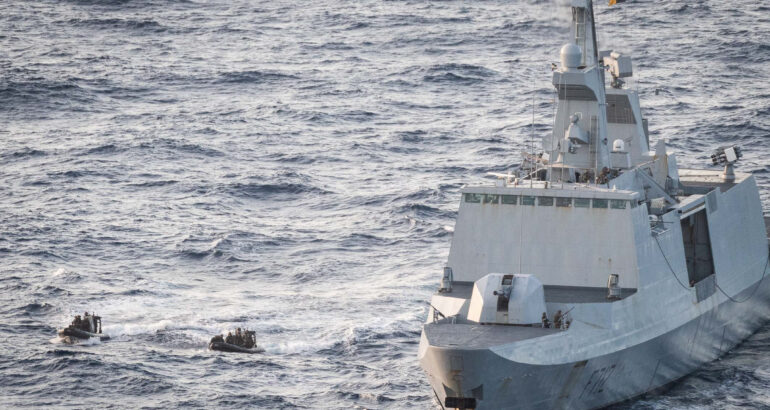 The crew of the frigate Courbet, supported by LHD Mistral, seized 1.7 tons of cocaine from a fishing vessel in the Gulf of Guinea. ©Marine Nationale/Défense

On May 22, 2022, the JEANNE D'ARC task group, composed of the Landing Helicopter Dock (LHD) Mistral and the La Fayette-class Frigate Courbet seized nearly 2 tons of cocaine from a fishing vessel in the Gulf of Guinea.

Task Group (TG) JEANNE D'ARC seizes nearly 2 tons of cocaine. With this action, the French military is dealing a new blow to illegal trafficking to Europe.

The LHD Mistral and Frigate Courbet, which have been part of the CORYMBE operation since the beginning of May, were mobilized for more than two days in the framework of an operation against drug trafficking.

On May 21, the JEANNE D’ARC group located a vessel suspected of drug trafficking.

After an initial relocation by the Mistral’s Dauphin helicopter, deployed for this operation on the Courbet, the use of the Schiebel drone (S-100), currently undergoing operational testing, enabled the identification of the suspect vessel and the monitoring of the Courbet’s visiting team for several hours.

On May 22, numerous airtight bags containing loaves of cocaine were discovered and brought back by the Courbet survey team on board the frigate. This catch represents nearly 2 tons of cocaine with a value of more than 50 million Euros according to the estimates of the Anti-Drug Office (OFAST).

Since 1990, France has deployed one or two vessels on a quasi-permanent basis in the Gulf of Guinea for the purpose of contributing to the reduction of maritime insecurity, by helping to strengthen the capabilities of the navies bordering the Gulf and of the centers of the Yaoundé Process. The deployment of French vessels in operation CORYMBE completes the French system stationed in West Africa and constitutes the maritime component of the operational cooperation implemented by the armies in the Gulf of Guinea.

Throughout its deployment, the JEANNE D’ARC 2022 group maintains knowledge and appreciation of the situation in the areas it passes through while contributing to maritime security. Its mission is part of the French defense strategy in the Indian Ocean, affirming the interest of France, a coastal nation, for this zone. It also contributes to France’s sovereignty missions in its maritime zones, and strengthens cooperation with its main strategic partners in the Indian Ocean and the Atlantic.

In March 2021, the French Navy performed a record seizure of more than 6 tons of cocaine in the same area.

The La Fayette-class Frigate Courbet is the first ship in the class to have received a mid-life update and this is her first operational deployment post-upgrade.