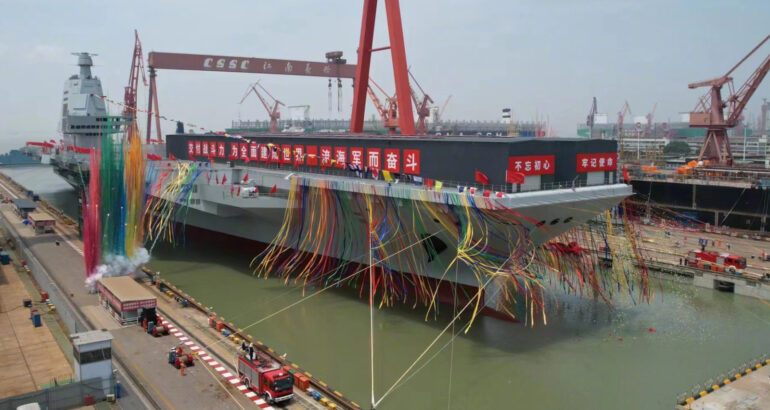 Click to Enlarge. The Aircraft Carrier Fujian, also known as the Type-003, was launched in Shanghai, China, on June 17 2022. The aircraft carrier is comparable in size to the U.S. Navy's Nimitz and Ford classes.

Aircraft Carriers are a growing part of China's blue-water navy ambitions. A new carrier, the Type-003, has been launched. It is similar in size to the U.S. Navy's Ford and Nimitz class super carriers. This is the first non-US carrier in the world to even come close.

China has launched its largest and most impressive aircraft carrier to date. The Type-003 carrier rivals U.S. Navy carriers in size, the first non-American carrier to do so.

Open source intelligence (OSINT) confirms that the carrier, named Fujian, was launched on June 17 in Shanghai, China. Naval News has been following its construction before the launch and has observed leading indicators.

10 years after China commissioned its first aircraft carrier, the Type-003 Fujian will further expand and mature the Chinese Navy’s capabilities. It is part of a shift to a true blue water navy, operating in the Pacific and, if called upon, globally.

Part of a slogan written on the ship for the launch, visible in satellite imagery, has been translated as “to build a strong and modern navy, and provide strong support for the realization of the Chinese dream of a strong military. To realize the party’s goal of strengthening the army in the new era, and build the people’s army into a world-class army in an all-round way“. Note that in China, the Navy (known as PLAN for People’s Liberation Army Navy) is part of the Army (PLA).

The Type-003 is comparable in size to the U.S. Navy’s Nimitz and Ford classes. And it’s design is similar in many ways. At the same time, it is an evolution of the first two Chinese Navy (PLAN) carriers.  These were built on Soviet technology.

The first, Type-001 Liáoníng (CV-16) is the former Kuznetsov class carrier, Varyag. The then-unfinished ship was sold to China as scrap in 1998, where it was completed and entered Chinese service in 2012. The second carrier, Type-002 Shandong (Cv-17), is a locally built ship. It features many small improvements over the first boat but is equivalent on overall terms.

The most visible difference in the Type-003 is the switch from ski jump to catapults. The older carriers launched aircraft under their own power of a ramp at the front of the flight deck. The Type-003 will have three catapults, like U.S. Navy carriers.

Catapulted  Into The 21st Century

By coming late to the game, Chinese designers benefit from decades of research and development by others. Bypassing intermediate steps, the new carrier incorporates much of the latest thinking.

Like the U.S. Navy’s Ford class carrier, the catapults will be EMALS (Electromagnetic Aircraft Launch System). This uses electricity instead of traditional steam, which should confers some advantages. The system takes up less room and should be able to launch aircraft at a higher rate.

At the same time we should not underestimate the importance of the Chinese Navy’s own lessons. They have been operating aircraft carriers for 10 years and have developed training, procedures and infrastructure.

In recent months the first carrier Liaoning was operating in the open waters of the Western Pacific. Japanese defense officials noted that over 100 aircraft launches were undertaken. This shows a significant operational tempo. It is indicative of growing confidence and credibility in the aircraft carrier game.

At the same time China is building up its infrastructure to support the carriers. The naval bases at Sanya and Yulin on Hainan in the South China Sea are being expanded. A massive new dry dock, big enough for an aircraft carrier, has been built there. And nearby Lingshui air base, which hosts the carrier’s aircraft when they are in port, is being upgraded.

The Type-003 carrier will be the latest and best carrier in Chinese service. It is expected to carry the latest J-35 fighter, China’s answer to the F-35C Lightning-II. The J-35 is a twin engine aircraft however, a characteristic traditionally favored for naval operations.

The new carrier’s significance is not the incremental improvements over earlier ones. Having three carriers will give the Chinese navy greater power projection capabilities. As a blue water fleet, China will be able to deploy its carrier battle groups with greater frequency. It will also be able to bring multiple carrier battle groups to bear on a situation. This may have a tactical and strategic relevance.

Andreas Rupprecht, defense expert and author of several books on the Chinese military, noted that such large carriers were until now exclusively for the U.S. Navy. “It is the next major step in exploring new capabilities. And gaining a lot of experience over the next years. The PLAN is well aware that it has barely 10 years of operations. It is in no way comparable to the USN’s knowledge and understanding. But anyone who wants to walk, has to start with crawling, …and that’s what the Type 003 is for.“

There is an increase in aircraft carrier capabilities worldwide. The U.S. Navy still has a massive lead, but China will take the second spot in terms of numbers and size. It faces competition though. Britain has revived its once-pioneering capability, and France is building a newer carrier in the same league as the Chinese ones.

Naval News Staff 09 Jun 2022
The Russian Navy's aircraft carrier Admiral Kuznetsov, which is under maintenance since 2017, is not expected to enter service before 2024.

Naval News Staff 16 Mar 2022
Since the beginning of February, the U.S. Navy's Carrier Strike Group 8 (CSG) with USS Harry S. Truman (CVN-75) and the French Navy CSG, with aircraft carrier Charles de Gaulle (R91), have been coordinating their operations in the Mediterranean.