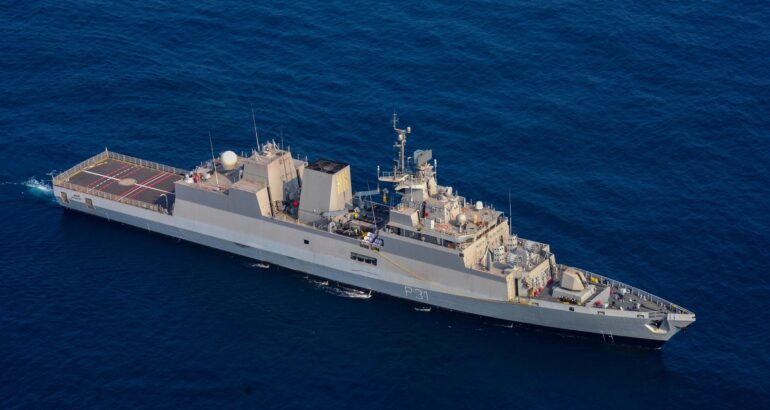 INS KAVARATTI (P31) during sea trials. The exact design of the NGCs were not issued by the Indian government yet. Indian Navy picture

Following the call of the Prime Minister of India, the Defence Acquisition Council (DAC) of India, in a meeting held on June 06, 2022, acknowledged the need for procurement proposals of the Armed Forces amounting to Rs. 76,390 crore (~ USD 9.8 billion).

The AoN includes the procurement of next-generation corvettes (NGC) at an estimated cost of about 36,000 crore (~$4.6 billion). The number of NGC was not mentioned in the press release issued by the Indian government, but India’s domestic media claim that eight corvettes will be built for the Indian Navy, while the RFI for the project was issued in 2016 suggested seven corvettes.

These NGCs will be versatile platforms for a variety of missions, namely surveillance missions, escort, deterrence, Surface Action Group operations (SAG), search and attack operations, and littoral defence. These NGCs will be built based on a new design developed in-house by the Indian Navy, using state-of-the-art shipbuilding technologies, and are expected to help promote the government’s SAGAR (Security and Growth for All in the Region) initiative.

The Indian Navy’s next-generation corvettes are a planned class of corvettes that are capable of Offensive SSM attacks, Anti Submarine Warfare Operations, Local Naval Defence, MIO, and VBSS Operations. Under this initiative, the Indian Navy plans to acquire seven advanced missile corvettes. Though the RFI suggests the deliveries of the corvettes commence in 2023, it doesn’t seem feasible at the moment.

The length of ships will not be longer than 120 meters, but the beam and the displacement were not mentioned in the RFI. The crew of the new ships will consist of 21 officers and 137 sailors. They will have a range of not less than 4000nm at sustained economical speed. The ships will have a top speed of more than 27 knots, and max sustained speed will be more than 25 knots.

The future corvettes will be armed with 8 surface-to-surface missiles, as well as a full-size surface-to-air missile system (SAM) that will provide the ship with credible AMD coverage of nearly 360 degrees and be capable of engaging sea-based missiles flying 3to 5 m above sea level at a maximum speed of 3 Mach. The NGCs will be equipped with a stealth gun with a range of at least 15 km capable of engaging SU, AA and AMD, as well as a close-in weapon system equipped with EO sensors.

The ships will employ ASW systems to counter underwater threats, such as;

NGCs will carry and house a helicopter or rotary-wing UAV, and will be capable to conduct helo operations up to sea state 4. A 7-meter RHIB (Rigid Hull Inflatable Boat) will be deployed to the vessels.