Turkish defence company STM announced on June 26, 2022 that it has begun construction of the 500-tonne "STM500" submarine.

The head of the Turkish Defence Industries Presidency (or SSB), Ismail Demir, also shared the start of construction on his Twitter account, calling the event a milestone for the construction of a submarine by national means. In his tweets, he also elaborated on STM500’s mission portfolio.

“The STM500 is designed for use both on the open sea and in shallow waters. It will be equipped with advanced and modern warfare systems that include equipment to meet tactical requirements such as reconnaissance and surveillance, special forces operations and anti-submarine warfare.”

STM recently published the Naval Projects document that discloses the design specifications of the STM500. At the 10th Naval Systems Seminar, held in November 2021, it was announced that the construction of the STM500 small submarine is scheduled to begin in 2022.

In the seminar, STM officials revealed that the construction of one Small-Sized Submarine will take 48 months, with the full project expected to be completed in 72 months. The officials didn’t reveal the customer information.

“As the first engineering company in Turkey capable of building and modernizing submarines, we have reached another historic milestone. We are proud to start the production of the pressure hull of our submarine STM500, the work of our national engineering. I congratulate all my employees who have contributed to our STM500 submarine, which has high export potential.”

The STM500 is a shallow-water diesel-electric attack submarine that was developed by STM as a conceptual design. The platform can accommodate a crew of 18 personnel (+6 Special Forces). It has an endurance of 30 days and can dive at depths of more than 250 meters. It is fitted with four tubes, each of which is loaded with a different variety of eight modern heavy-weight torpedoes or guided missiles.

Various types of sonars, including a cylindrical array and a cylindrical transducer array, as well as passive ranging, passive intercept array, and own-noise array, can be installed on the submarine. It is anticipated that the information gathered by these sensors will be processed by the combat management system. The platform will be equipped with an optronic mast as well as an ESM antenna.

The conceptual design idea of the mini-submarine was offered by a foreign country, an official from STM Defence stated on condition of anonymity. As the project’s negotiations progress, the specifics and characteristics of the boat may change in order to meet the needs of the customer. 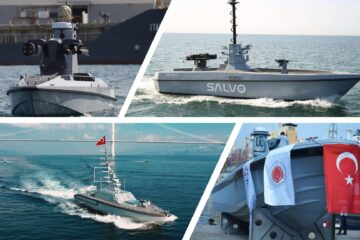