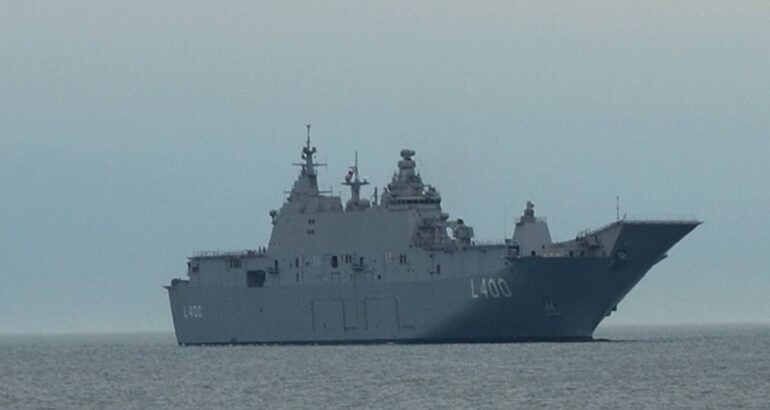 The future flagship of the Turkish Navy, the TCG Anadolu (L-400), was sighted in the Sea of Marmara on June 20, 2022, marking the official start of sea trials. The new ship LHD made another sailing in February 2022, but this was announced as a preliminary stage of sea trials. Officials at Sedef Shipyard, which has been building the Anadolu in collaboration with Spanish shipbuilder Navantia, announced on Linkedin that official sea trials have begun.

TCG Anadolu is projected to be delivered to the Turkish Navy in October 2022, and TB-3 drone launching and the recovering system upgrade is planned to begin within this year.

TCG Anadolu has reportedly planned to be transformed to a drone carrier, after the U.S. broke the partnership with Turkiye on the F-35 JSF project. As a result, Baykar, a Turkish drone manufacturer, announced in early 2021 that it was working on a specific UCAV called TB-3, an improved and folding-wing version of the combat-proven TB2 drone that would be deployed aboard TCG Anadolu.

Baykar has been building TB3 drones exclusively for Anadolu. A roller mechanism will be installed on the LHD to launch drones, while security netting will be used to secure landing drones, according to recent reports. SSB’s 2022 Projection video suggests that the integration of the drone launching system into the LHD is scheduled to begin in 2022.

MIUS will be the second option, along with TB-3, for deploying airpower aboard the TCG Anadolu after it is potentially operational in 2025. MIUS will be deployed on the Anadolu as a light attack aircraft, although the unmanned combat aircraft is projected to conduct a multitude of military actions, such as strategic offensives, close air support (CAS), missile offensives, suppression of enemy air defenses (SEAD) and destruction of enemy air defenses (DEAD), according to Baykar.

On the other hand, in terms of amphibious capabilities, the TCG Anadolu equipment is close to being operational. The armoured amphibious naval assault vehicle (MAV), abbreviated “ZAHA” (Zirhli Amfibi Hücum Araci), was unveiled during the Turkey-led EFES-2022 joint multinational amphibious exercise. FNSS, the manufacturer of the ZAHA, announced in December 2021 that ballistic and mine-resistant testing of the armoured vehicle had been completed, and the vehicle’s participation in a large-scale exercise indicates that delivery is imminent.

Sedef Shipyard also announced two weeks ago that the company has been conducting the sea trials of the smaller amphibious vessels (LCM – Landing Craft Mechanised) that will be deployed to TCG Anadolu in the vicinity of the shipyard facilities. The vessels will be ready before the commissioning of TCG Anadolu.

“LCMs; The Multi-Purpose Amphibious Assault Ship was developed nationally for ANADOLU to meet operational requirements and, unlike the other ships, was built to carry the future ALTAY main battle tanks.”