The government team and its two prime industry partners led the effort at the program’s System Test and Integration Lab (STIL), where Lockheed Martin’s GCS controlled Boeing’s Hardware-in-the-Loop (HITL) air vehicle for the first time. The HITL utilizes aircraft hardware and software to provide a realistic surrogate for the air vehicle.

“This achievement is the result of weeks of preparation and dedication by highly skilled teams. Bringing multiple systems together is never easy, but the joint government/industry team, coming together, understanding problems and finding solutions made this event successful. We learned how the system works as a whole and that early learning and discovery is key to keep the program moving forward.”

Maday said the team set a goal to send a basic command between the GCS and the HITL. In order to meet that objective, Boeing and Lockheed Martin needed to deliver functional software for the government to exercise the GCS, the HITL and the network components allowing connectivity between the systems.

“The team met the initial goal ahead of schedule and used the remaining time to exercise more functionality like sending taxi commands,” Maday said. “They also simulated a lost link that verified the proper GCS display indicators, which is a critical function to ensure network connectivity between development environments.”

This fall the team plans to simulate a complete flight using the HTIL air vehicle and will also demonstrate switching connections “links” to the aircraft as well as adding other aircraft hardware and software into the mix.

“It’s great to see the combined team working side-by-side, learning and ultimately demonstrating success,” said Capt. Sam Messer, PMA-268 program manager. “This is how we get to IOC [Initial Operational Capability]—we integrate, test, and learn early and at pace.”

MQ-25 will be the world’s first operational carrier-based unmanned aircraft to provide an aerial refueling capability to the fleet.

The MQ-25™ Stingray will be the world’s first operational, carrier-based unmanned aircraft and provide aerial refueling and intelligence, surveillance and reconnaissance (ISR) capabilities that enhance capability and versatility for the Carrier Air Wing (CVW) and Carrier Strike Group (CSG). Integration of a persistent, sea-based tanker into the CVW will make better use of our combat strike fighters and extend the range of our aircraft carriers. The system will be a critical part of the future CVW and is central to the Navy’s strategic Unmanned Campaign Framework, laying the foundation for all future carrier-based unmanned systems and pioneering the cutting-edge manned-unmanned teaming (MUM-T) operational concept. The Navy plans for all NIMITZ and FORD-class carriers to eventually be MQ-25 capable.

Following its first flight in 2019, T1 accumulated approximately 125 hours in the air, helping to accelerate the team’s understanding of the aircraft’s aerodynamic performance and informing design decisions for both the air vehicle and its software.

In 2021 the MQ-25 T1 test asset was successfully integrated into the carrier environment, where a demonstration aboard the USS George H.W. Bush confirmed the functionality, capability and handling qualities of the unmanned aircraft’s deck handling system.

U.S. Navy Might Have UCAVs Joining the Fleet in a Few Years

Peter Ong 24 Jul 2021
The Boeing MQ-25A “Stingray” is being built as an unmanned tanker to fly off aircraft carriers and refuel US Navy and US Marine Corps jets, but will the US Navy create an Unmanned Combat Aerial Vehicle (UCAV) as originally planned ? 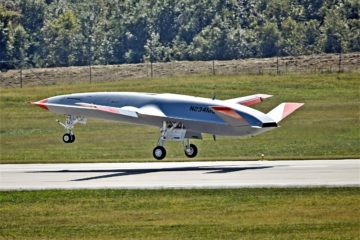 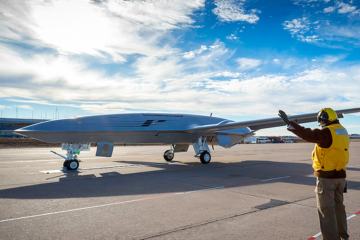