“To the Sailors and Marines who will serve aboard USS Fort Lauderdale, thank you and your families in advance for the service you will fulfill and sacrifices you may endure. The moment you bring this Amphibious Transport Dock to life, you will strengthen the integrated deterrence capability of our entire Joint Force.”

“It is such an honor to be involved in the commissioning of the USS Ft. Lauderdale (LPD 28). It’s another chapter to the momentous history, friendship, and respect that the city has with the U.S. Navy,” said U.S. Rep. Debbie Wasserman Schultz. “As Chair of the Military Construction and Veterans Affairs Appropriations Subcommittee, my support for our military is unwavering. I will always stand by our service members and veterans, and honor those who continue to serve.”

Ship sponsor Meredith A. Berger gave the first order to “man our ship and bring her to life.”

“The Navy names ships for people, places, and ideas that are special. The Navy certainly picked a special place when naming the USS Fort Lauderdale,” she said. “I am honored to be the sponsor for this incredible ship.”

“Finally, if there is one thing that history has shown us from the days of antiquity it is that the stakes of the competition for control of the seas are high and for our part, USS Fort Lauderdale stands ready to deliver on any day, and at any time. And those that may wish to challenge us – they should pause. For we are equipped with America’s unstoppable secret weapon that our enemies will never be able to duplicate and that is the fierce, dedicated and unstoppable, men and women of the United States Navy and Marine Corps!”

The ceremony marks the official transition of the USS Fort Lauderdale into the fleet and caps a weeklong series of events celebrating the ship and its namesake city.

Amphibious transport dock ships are warships that embark, transport, and land elements of a landing force for a variety of expeditionary warfare mission 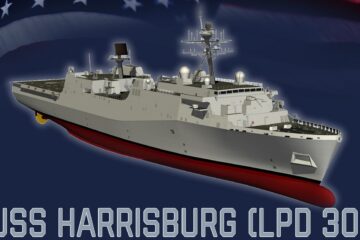