The Chinese naval shipbuilding industry continues to demonstrate that it is in a league of its own: A ship spotter photo released today shows five Type 052D destroyers all taking shape in a construction dock at the Dalian shipyard.

The picture published on Chinese microblogging website Weibo by user @lyman2003 shows the five hulls at various stages of completion at the Dalian shipyard. Located in Northern China, it is one of two Chinese yards building large, destroyer-size, surface combatants. As Naval News previously reported, this shipyard launched on the same day a Type 052D and a Type 055 two years ago.

With such a pace of construction the People’s Liberation Army Navy (PLAN) confirms its status of “largest in the world”, a rank it reached in 2021 according to a United States Department of Defense (DoD) report. China’s shipbuilding industry launched a record 10 Destroyers in 2019 with 8 more in 2021.

Contacted by Naval News, two Chinese military observers confirmed that there are currently 25 destroyers of the class (13 Type 052D and 12 Type 052DL) currently in service with the PLAN. They will soon be joined by the five under construction at Dalian and (at least) one more being built at the Jiangnan Changxing Shipbuilding and Heavy Industry Corporation (the other Chinese shipyard building large surface combatants, located North East of Shanghai). The new “DL” variant features a stretched hull (more details below) and all new Type 052 destroyers are expected to be built in the “DL” variant.

The Type 052D Kunming-class (Nato designation: Luyang III) is one of the latest generation of guided-missile destroyer (DDG) of the Chinese Navy. It is based on its predecessor, the Type 052C DDG and likely shares the same hull. However the Type 052D incorporates many improvements in terms of design as well as sensors and weapons fit. This modern class of vessel is considered as the Chinese equivalent to the American AEGIS destroyers.

The vessels are still being built for the PLAN by two shipyards: Jiangnan-Changxing shipyard and Dalian Shipbuilding Industry Company. The first vessel of of the class, Kunming (hull number 172), was commissioned in March 2014.

The Type 052D is intended for the high seas. It shares almost the same platform as its predecessor, the Type 052C, but has more advanced combat systems and illustrates perfectly the Chinese military’s “Run fast with small steps” approach in their weapons development.

The ships are equipped with a total of 64 vertical launch system (VLS) cells for:

Four modules are located forward of the ship in front of the superstructure, four others aft, in front of the helicopter hangar. These destroyers are also armed with a H/PJ-45A 130mm main gun, a H/PJ-12 30mm CIWS (first 8 ships in class are fitted with the older variant: H/PJ11), HQ-10 short range SAM and two triple torpedo launchers

The “DL” variant was introduced from the 14th ship in the class, Zibo (淄博) with pennant 156: The hull of the destroyer is longer by about 4 meters. This extra length involves primarily its hangar and helicopter deck at the stern of the ship. The modifications were introduced in order to accommodate the new Z-20 helicopter. 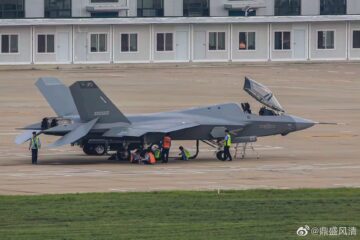