The First-of-Class (FoC) Paolo Thaon di Revel (P 430) PPA (Pattugliatore Polivalente d’Altura) combatant multirole (offshore) patrol vessel “has joined Operation AGENOR and has crossed the Strait of Hormuz for the first time in her history”, said the EMASOH (European-led Maritime Awareness in the Strait of Hormuz) maritime initiative on its social medias (Linkedin).

“In the upcoming months, many crossings of the Strait will follow up, for the ship will stay in direct support of Operation AGENOR, the military pillar of the European-led Maritime Awareness in the Strait of Hormuz (EMASoH). While the Thaon di Revel was entering the Gulf, she accompanied already two merchant vessels through the Strait of Hormuz, in order to contribute to the safe and secure passages of ships in the region”, the Operation AGENOR media office continued.

The ITN Thaon di Revel PPA has therefore started its three months direct support to the Operation AGENOR. On last 6th July, the command of the Force Headquarters of Operation AGENOR was handed over from Belgium rear admiral Tanguy Botman to Italian rear admiral Stefano Costantino. Italy is commanding (for the first time) the multinational military staff for six months, providing extra staff member and air and naval assets in associated and direct support.
The EMASOH is a nine European countries (Belgium, Denmark, France, Germany, Greece, Italy, Norway, Portugal, The Netherlands) maritime security initiative to promote safe and secure transit and freedom of navigation for merchant shipping in the Gulf region, Strait of Hormuz, Gulf of Oman and the North Arabian Sea. EMASoH is deploying surface and air assets monitoring the area, in a de-escalatory way and in accordance with the international law to reassure merchant shipping.

The FoC Paolo Thaon di Revel PPA is on its first operational deployment since its delivery to the Italian Navy by Fincantieri through OCCAR agency on 18 March 2022 and assignment to the 1st Naval Division of the Italian Navy based in La Spezia after a fitting-out in the difficult pandemic period under the ITN New Shipbuilding and Outfitting Centre (MARINALLES) and the Italian MoD Naval Armament Directorate (NAVARM) New Ship Construction Office (UTNAV) survey. The crew headed by commander Emanuele Morea has since conducted the preliminary training in parallel with on board system acceptance trails which were completed on 21 April under the support and training certification of the 1st Naval Division HQ’s board lead by its commander, admiral Lorenzano di Renzo.

The Thaon di Revel subsequently participated to the Italian Navy most important yearly attained exercise Mare Aperto from the beginning of May, being the First-of-Class (FoC) platform among the latest shipbuilding programmes to participate to this exercise before conducting the so-called ‘elementary training’ finalized to prepare and certify the crew to conduct the operational activities. The ship arrived at Taranto naval base on 16 June to conduct the elementary training by the Italian Navy naval-air training centre (MARICENTADD) and be certified ‘ready for operations’.
With a crew including a flight detachment with one NHIndustries SH-90A helicopter from the 4th helicopter group, a team of the GOS (Gruppo Operativo Subacquei) divers/EOD group and a detachment of the San Marco (amphibious) brigade for security and boarding activities, the Thaon di Revel left La Spezia for the Middle East mission on 12 August, receiving the visit of the ITN Chief of the Fleet (CINCNAV), admiral Aurelio De Carolis, while on sailing towards the Suez Channel.

Although the Italian Navy and authorities are not commenting, Naval News understood the Thaon di Revel has been sailing and passed at least the Suez Channel together with the Qatar Emiri Naval Forces’ Al Zubarah (F 101) corvette and Musherib (Q 61) OPV on their transferring voyage to Qatar.

According to the EMASOH statement Thaon di Revel has later conducted a passing exercise with the Spanish Navy’s frigate Numancia (F 83), the flagship of EUNAVFOR Operation Atlanta and the latter newly appointed Force Commander Commodore Marcelo Correia of Portuguese Navy, visited the ITN ship. According to the same statement, the PPA was also in support to the Operation Atalanta, before passing under Operation AGENOR-EMASOH. Italy also currently deploys the Fasan (F 591) FREMM frigate to the EU mission Operation Atalanta.

The Middle East deployment for the Thaon di Revel will continue after the Operation AGENOR-EMASOH with the participation to the Italia Joint Task Force to be deployed in Qatar to contribute to the security of the FIFA World Cup 2022 event being attained between 20 November and 18 December.

The Pattugliatori Polivalenti d’Altura are a new class of ITN combatant platforms which represents a technological and capability jump compared to current generation. Design to conduct a wide range of missions, from maritime security to humanitarian assistance and disaster relief (HADR), the PPAs are being delivered in three configurations (Light, Light Plus and Full) based on common platform and differencing for the new generation sensors and weapon outfit. The Paolo Thaon di Revel (P 430) is the First-of-Class (FoC) and due to the new design and equipment a prototype platform. With an overall length of 143 m, a beam of 16.5 m, a 5m draught and a displacement of ca 6350 tonnes at full load (PPA in the Full configuration), the PPAs are distinguished by a unique hull design featuring a wave-piercing bow for higher speeds, stabiliser fins positioned amidships, a steel hull up to the first level over the main deck, the superstructures divided into main blocks and two modular multipurpose areas respectively amidship and under the flight deck to accommodate a range of equipment to conduct from military to HADR operations.

With a crew of over 130 elements, for its first deployment, the Thaon di Revel is equipped with two Zodiac Hurricane (9 and 7 meters) RHIBs being respectively operated by a stern launch and recovery station and amidship with davit in addition to five standard shelters for additional personnel accommodation in the modular area under flight deck. The latter can operate an EH101 while the hangar is able to accommodate and maintain up to two SH90As and in the future unmanned air vehicles. 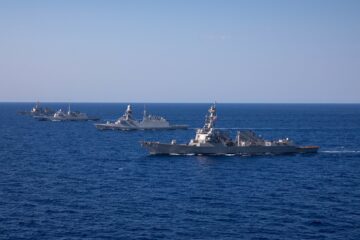