The U.S. Navy’s Chief of Naval Operations’ (CNO) Navigation Plan (NAVPLAN) 2022 calls for 373 manned ships and 150 unmanned ships for a total of 523 (estimated) ships by 2045. The NAVPLAN breaks down the classification types and roles of these U.S. Navy vessels into their desired numbers and allotments.

“We must move decisively to modernize U.S. naval power as we maintain readiness and a forward posture that keeps America and our Allies safe and prosperous.  The Navy is adopting a more continuous, iterative force design process to focus our modernization efforts and accelerate the capabilities we need to maintain our edge in this critical decade and beyond.”

The desired force level by 2045 calls for:

Analysis of the CNO’s NAVPLAN can be found at the United States Naval Institute.

The U.S. Navy has admitted to the Media that conventions, policies and procedures, and potential responses to such incidents for unmanned surface and subsurface vessels still need to be fleshed out and are still undergoing discussions and reviews.

For instance, if a hostile maritime party were to capture, sabotage, hack, hijack, damage, sink, ransom, or board an unmanned vessel without one U.S. Navy sailor or Marine aboard, how should the U.S. Navy and the U.S. Department of Defense respond?  Would that be considered an Act of War against the United States?  What levels of at-sea escalation are required before a manned naval response is dispatched to investigate?  When do “unmanned and expendable” vessels become “precious and essential” to U.S. National Security and thus dictate that these unmanned vessels should not be damaged, touched, and harmed in any way?  When does the diplomatic approach fail to warrant the use of force over these oceangoing robots?  When does Artificial Intelligence (A.I.) become more valuable and secret than just codes, software, data transmissions, and the steel and aluminum the A.I. sails?

Hopefully, these policies and procedures for U.S. Navy unmanned vessels will be solidified by 2045 or sooner. 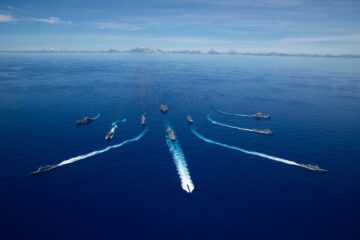