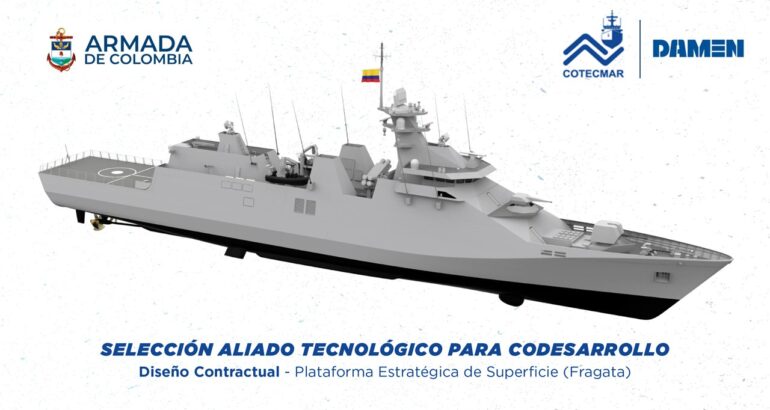 The Colombian Ministry of Defense announced that local shipbuilder COTECMAR will sign a contract with Damen Shipyard in the coming days to jointly develop the "first Colombian frigate".

Cotecmar, a company of the Social and Corporate Group of the Defense Sector GSED, has developed for 22 years its capabilities in science and technology to meet the needs of the Colombian Navy and generate the necessary support for all maritime and river activities through technological solutions that include the design and construction of vessels that have represented important industrial and technological benefits for the country.

All these benefits will be reinforced in the fulfillment of the “Mission to build the first frigate made in Colombia”, which will emerge from a planned and knowledge-intensive industrial process that will not only make it possible to fulfill the duty to protect the maritime heritage of all Colombians but will also contribute to the creation of decent and stable jobs, the potentization of production chains and the promotion of science and technology to strengthen the competitiveness and export capacity of the country’s vessels.

As part of this mission, the National Navy and Cotecmar have entered into a science and technology agreement to select the best technological ally for the joint development of the contract design for the first Colombian frigate in Colombia.

As a result of this international process, we recognize the National Navy and Cotecmar for the selection of the technological ally Damen Shipyards from the Netherlands, a company that has obtained the best conditions in terms of effectiveness, cost and risk for the joint development of the contractual design of the frigate in Colombia. and that according to the schedule established in the process, the contract between Cotecmar and Damen will be signed in the coming days.

SIGMA is Damen’s Ship Integrated Geometrical Modularity Approach. It is based on the experience gained by building seven generations of surface combatants for, and including feedback from, the Royal Netherlands Navy. The use of modular platform components enables the tailoring of operational characteristics.

The SIGMA 10514 is the most recent and advanced frigate in Damen’s SIGMA family and has been delivered to Indonesia (2 vessels) and Mexico (1 vessel). The smart, modular building strategy developed by Damen facilitated the local construction of the Multi-Mission Frigates in Indonesia (PTPAL) and Mexico (ASTIMAR 20).

According to the company, SIGMA frigates provide major advantages such as decreased detectability by signature reduction measures and due to improved shock resistance, the vessels also ensure higher survivability rates. Deploying Naval Intact and Damaged Stability standards, the vessels offer built-in redundancy in vital systems and they are equipped with a CBRN Enclosed gas-tight citadel.

Key Specifications (Based on Indonesian variant):

Based on the image released by the Colombian MoD, the vessel in Colombian Navy configurations will features: