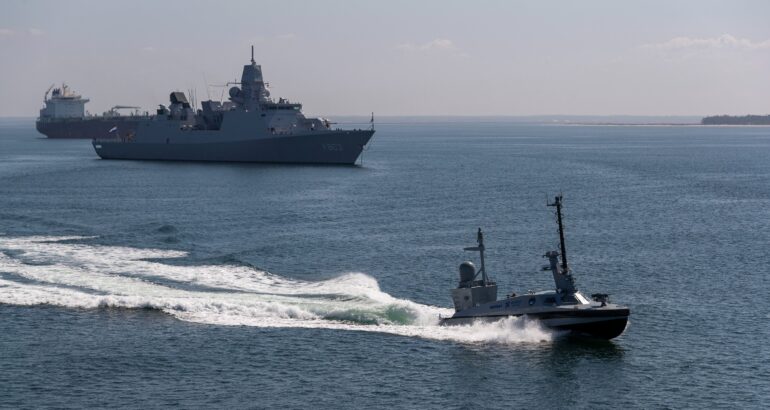 At the Maritime Operational Experimentation Center (CEOM) in Troia, Portugal, a Distinguished Visitors Day marked the end of REPMUS22 and the beginning of Dynamic Messenger 2022 (DYMS22), which takes place Sept. 25-30, 2022, in Portuguese exercise areas in the North Atlantic.

Exercises REPMUS22 and DYMS22 present opportunities to test the interoperability of new maritime unmanned systems, ensuring that Allies can work together to counter current and future security challenges.

Over two weeks in September, REPMUS22 focused on testing and training; integrating new technologies in the maritime domain. DYMS22, which begins on 25th September, follows suit, with a focus on practical operational training with new maritime technologies and readiness.

MARCOM also committed two of NATO’s Standing Naval Groups to support this operational experimentation initiative. Over months of planning, scenarios created alongside industry and academia are being tested, utilizing both well-established and cutting-edge unmanned technology.

These scenarios include such topics as counter-mine warfare, port protection, countering conventional submarine threats, and addressing asymmetrical threats such as terrorism.

“We build naturally on the success of REPMUS as a well-established exercise and now take on the next step in the integration of these capabilities into our platforms at sea. That drives tactics, training, procedures, education and the doctrine that we follow. Experimentation is an accelerant to make sure that we think ahead and stay ahead.”

Allied Command Transformation (ACT) is playing a pivotal role guiding experimentation and harnessing the unique opportunities presented by the structure of the exercise. The work conducted by ACT to date is advancing lessons learned, helping to introduce Minimum Viable Products for Maritime Situational Awareness and providing expertise for analysis and assessment of experiments.

“Exercises like this, can help showcase opportunities for allies to see where they may want to invest in the future. We always try to look ahead and ensure we maintain that competitive edge and to embrace new technologies when the time is right for the alliance.”

DYMS22, provides an opportunity for NATO personnel to work alongside the private sector and academia, employing flexible operational experimentation techniques to quickly verify and assess an array of benefits potential solutions may offer to capability development. Exercising with a deliberate focus on operational experimentation allows for the collection of data, which finds its way into the cycle of capability development that will then inform NATO Allies how they might seamlessly work together in all domains in order to deter aggressors and defend the Alliance, today and in the future.

Although there is no firm CONOPS on the role of unmanned systems in naval warfare, we see multiple applications every day. Unmanned aerial vehicles have been used by several navies for ISR missions as well as smaller strike operations.

The Russo-Ukrainian War was the first theater to observe the effectiveness of these systems in a full-blown conflict. Turkish-made TB2 Bayraktar drones were very successful against the small patrol ships of the Russian Black Sea Fleet, and Naval News contributor and OSINT analyst H. I. Sutton recently analyzed an unmanned surface ship used by Ukraine against Russian forces. These are the clear signs that we will see the unmanned effect in naval warfare more often in the future.

One of the most important stages of the use of unmanned assets on the battlefield is their integration into fleets for operations, namely manned-unmanned teaming. Although the technology of unmanned systems is not yet at its peak, they are useful enough to support combatants in the field. The U.S. Navy has been working on this concept and has practiced several applications in the Unmanned Battle Problem exercises. Although there have been several exercises with unmanned systems, such as REPMUS or IMX, Dynamic Messenger stands with the integration of unmanned assets into fleets at NATO structure.

Because DYNAMIC MESSENGER (DYMS) is the first of an annual series of experimentation exercises, under the joint ownership of the NATO Maritime Commander (MARCOM) and the Allied Command Transformation (ACT). 2022 will be the first iteration of this exercise, which is, designed to allow large-scale OPEX where NATO operational communities (Nations and NATO entities) work together with Industry and Academia to develop operational concepts and doctrine and promote the integration of Maritime Unmanned Systems (MUS) into NATO operations utilizing the NATO Standing Maritime Forces. (SNMG 1 & SNMCMG 1).

During the exercise unmanned assets will be used in MUS consept in the following warfighting mission areas:

It would be interesting to observe the collaboration of the unmanned systems with the maritime groups, as it opens a new gate to future naval warfare.