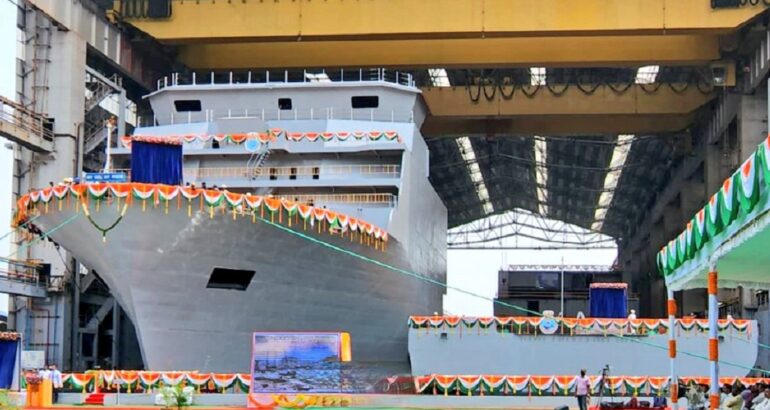 Two Diving Support Vessels (Nistar and Nipun) being built by Hindustan Shipyard Ltd, Visakhapatnam were launched on 22 September 2022 by Mrs. Kala Hari Kumar, in presence of Adm R Hari Kumar, Chief of the Naval Staff who presided over the ceremony as Chief Guest. VAdm RB Pandit CinC SFC, VAdm Dasgupta, FOCinC Eastern Naval Command, VAdm Kiran Deshmukh, Controller Warship Production and Acquisition, and other senior officers from the Indian Navy and Ministry of Defence were amongst the dignitaries who attended the launching ceremony.

Indigenously designed and built at HSL, these ships are a true testimonial to ‘Aatmanirbharta’. They are self-sustaining platforms that can operate at sea for prolonged durations.

DSVs equipped with an array of complex Diving Support systems and Deep Submergence Rescue Vessel (DSRV) will be deployed for deep sea diving and submarine rescue operations. Furthermore, the ships will be capable of conducting Search and Rescue operations and carrying out Helicopter Operations at sea.

This project is being executed with support from the Indian industry primarily MSME firms who have supplied Yard material, equipment, and services. The shipyard is extensively using the GeM portal for procuring material and services for the project. More than 120 MSME vendors across India have actively participated in the Project.

“Nistar” and “Nipun” were launched by achieving approx 80% indigenous content, a major step towards ‘Self Reliance’. DSV project has generated local employment opportunities and promoted indigenization which will boost India’s economy.

Mrs. Kala Hari Kumar, President of the Navy Wellness and Welfare Association (NWWA) performed the traditional honor and named these ships. These ships received a thunderous cheer from jubilant gathering as they embraced the welcoming waters of the Bay of Bengal.

The Diving Support Vessels (DSVs) are first of the kind, ships indigenously designed and built at HSL for the Indian Navy. The vessels are 118.4 meters long, 22.8 meters at the broadest point, and will have a displacement of 9,350 tons.

These ships would be deployed for deep sea diving operations. Additionally, with Deep Submergence Rescue Vehicle (DSRV) embarked, the DSVs are designed to undertake submarine rescue operations, in case requirement exists. Furthermore, these ships will be capable of sustained patrolling, conducting Search and Rescue operations and carrying out Helicopter Operations at high seas.