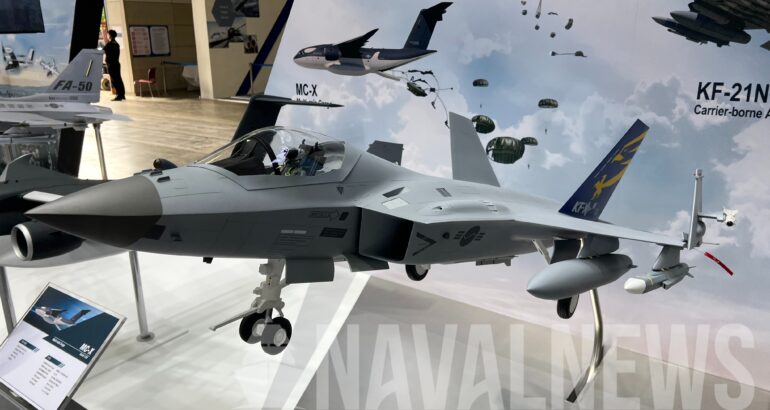 Korea Aerospace Industries (KAI) unveiled a scale model of the KF-21N during DX Korea 2022. It is the carrier-borne version of the company's indigenous 4.5-generation fighter jet known as KF-21 / KFX project and is intended for the CVX aircraft carrier program.

According to the information panel on display at the show, KF-21N has a length of 17.1 meters, a height of 5.2 meters, and a width of 12.3 meters. It can fly at the maximum speed of Mach 1.6 with a payload of 7620 kg. MTOW (Maximum takeoff weight) is around 25600 kg. Another key feature of the KF-21N is that the size is much larger than Lockheed Martin’s F-35B and the ground-based KF-21. The carrier-borne fighter jet adopted arresting hooks under its body and the wing-folding system that allows easier and more efficient accommodation in the limited space of CVX on its deck or hangar. KAI informed Naval News that the wings of the KF-21N are bigger than that of the original KF-21.

KAI explained that the company would like to recommend a single seat for KF-21N for operational efficiency. The company manufactured both single seat and multi-piloted seat fighter jets for the legacy KF-21. KAI confidently mentioned that KF-21N is the first 4.5-generation carrier-borne fighter jet that will be fitted with twin engines.

KAI told Naval News that the numerical specifications described on the information panel are based on a CATOBAR version of the aircraft. Placeable weapons would include both foreign and domestic missiles, such as air-to-air, air-to-surface, and air-to-ground missiles. KAI said that the jet’s space for ordnance was designed in consideration of future missile assets.

Naval News learned from company officials that KAI is considering both CATOBAR (Catapult Assisted Take-Off But Arrested Recovery) and STOBAR (Short Take-Off But Arrested Recovery) for the Korean Navy’s either lightweight or mid-sized aircraft carrier. Another person at the KAI booth observed on the condition of anonymity that there is a slight possibility of a CVX size-up in terms of tonnage could be presumably possible but said the decision is up to the Korean government. Naval News recently reported on this topic.

“We only propose concept of operations and a basic design to the government, and we made this mockup in consideration of both CATOBAR and STOBAR takeoffs since we don’t know how the CVX design would finally look like. Our design of KF21-N is not associated with the Korean Navy’s preference, and we have not been told by the military to design in a certain way.”

KAI also explained that KF-21N would be compatible with both lightweight and mid-sized carriers. However, KAI avoided commenting on how many KF-21Ns could be accommodated on CVX by saying that the construction and carrier planning would be conducted by a contracted shipyard. Confirming that both DSME’s and HHI’s carrier designs could use KF-21N, however, KAI asserted, “Possibly, it might be necessary to change the STOVL-based carrier concept that was shown in MADEX 2021, if the Korean Navy would like to operate KF-21N on the DSME’s design.”

If the flight deck of CVX is 250 meters long, then STOBAR might be a viable option, KAI added. In addition, STOBAR jets would have fewer weapons compared to CATOBAR, due to the technical limitations on the maximum ordnance weight. KAI refused to provide specific figures about STOBAR KF-21N’s maximum weight of ordnance for security reasons.

KAI showed interest in exporting KF-21N but raised a concern that the number of countries possessing operable aircraft carriers is very few. But a manager at the booth confidently shared his thought that KF-21N could be a reasonable option for other states that consider aircraft carriers or carrier-borne jets.

Regarding the possibility of developing KF-21N into fifth-generation jets like F-35, KAI commented the Korean government should make a decision. The manager proposed manned and unmanned teaming (MUM-T) and Korean Air’s UCAV as solutions to fill in the air gap and guarantee practical operations. Despite that further improvement of the KF-21 series would be dependent on DAPA and the Ministry of Defense, KAI indicated its plan to apply the improvement of ground-based KF-21 to the carrier-borne variant in a timely manner, as the 4.5-generation fighter jet was initially planned as a design that would be more evolved in the future.

KAI predicts the development of KF-21N would be completed in line with the actual deployment of CVX in 2033, meaning that a contracted shipbuilder would have 11 more years to conclude a final design and construct a carrier and that KAI could adjust KF-21N accordingly.

Juho Lee 22 Sep 2022
Thales pitched the SonoFlash new-generation sonobuoy to the Republic of Korea Navy (ROKN) and other international customers at DX Korea 2022...