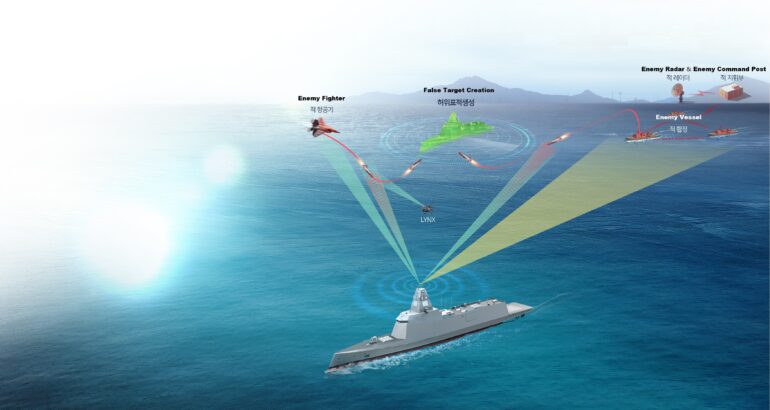 LIG Nex1 showcased its concept design for the Republic of Korea Navy (ROKN)’s Naval Electronic Warfare-II program at DX Korea 2022. With Hanwha Systems announcing that it will also take part in the program on September 22nd, competition between the two rival companies is likely to intensify.

During the 144th meeting of the Defense Acquisition Program Promotion Committee held on May 30th, South Korea’s Agency for Defense Development approved the development of a replacement for the electronic warfare systems in use on ROKN vessels. The program, dubbed Naval Electronic Warfare-II, will continue until 2036 at a cost of 720 billion Korean won or around $517 million.

The ROKN currently uses the LIG Nex1 ULQ-11/12K and SLQ-200(V)K Sonata EW suite and jammers for electronic warfare. The new system will be used in the KDDX destroyers and other future ROKN vessels.

The decision to develop a new electronic warfare system reflects the growing importance of electronic warfare in the modern battlespace. For warships, which integrate several expensive and advanced weapons systems into a single platform, being able to identify threats early and neutralize them quickly is of paramount importance.

LIG Nex1 is one of the companies in the competition and eager not to loosen its grip on South Korea’s naval electronic warfare market. The company believes its prior experience in manufacturing electronic warfare systems will give it an edge.

“We have the largest electronic warfare team in the country, with 180 personnel for research and development and another 100 for production…LIG Nex1 has been diligently preparing for 20 years to develop third-generation electronic warfare capabilities. We will use our expertise and know-how gained while developing the ULQ-11/12K and SLQ-200(V)K Sonata. However, this new system will not simply stop at improving the Sonata. We will create a completely new platform that uses artificial intelligence and other technology from the ‘4th industrial revolution.’ It will also use a more diverse range of wavelengths than the Sonata.”

According to LIG Nex1, the third-generation electronic warfare system will be capable of intercepting and analyzing signals from incoming missiles. It will also have “super accurate digital direction detection” and “smart jamming” capabilities.

“We will create a ‘Korean electronic shield.’ We are hoping to export the system to international buyers as well.”

Naval News reached out to LIG Nex1 for further comment regarding the capabilities of the system. The company said that it could not disclose additional information at this time.

LIG Nex1 will face competition from Hanwha. Even though the former has been producing electronic warfare systems for the ROKN for decades, Hanwha believes that it is better positioned against its rival this time around.

“The effectiveness of state-of-the-art naval electronic systems is decided by how well it can be integrated into the ship’s other sensory equipment…[Hanwha] can develop an electronic warfare system that is most compatible with the combat systems and integrated masts [of South Korea’s] latest ships, including KDDX.”

Hanwha won the contract to produce the integrated mast for the KDDX destroyers in 2020.