The aftermath of the sabotage against the Nord Stream pipelines in the Baltic Sea on 26 September has seen heightened readiness among several countries in both the Baltic and the North Sea.

The explosions took place in the Swedish and Danish exclusive economic zones, and the Danish Navy was quick to send both naval and airborne units to investigate, while on the Swedish side the Coast Guard is responsible with the Navy standing by to provide assistance if needed.

The Swedish Armed Forces in a statement released on 1 October note that the earlier heightened level of alert is kept up and they cooperate closely with other government agencies. The submarine rescue vessel HMS Belos was dispatched to the Nord Stream leaks sites. The Danish vessels deployed to the site of the leakages include environmental protection ship HDMS Gunnar Thorson as well as the frigate HDMS Absalon. Danish Prime Minister Mette Fredriksen has also discussed with a number of European leaders as well as NATO’s Jens Stoltenberg regarding cooperation on securing critical infrastructure.

Closer to the other end of the pipeline, Finland has declined to comment on whether there is an increase in readiness following the Nordstream leaks in line with a longstanding policy of ambiguity, but Prime Minister Sanna Marin hosted a press conference on 28 September during which she noted that Finnish authorities “closely monitor” the Finnish exclusive economic zone, without going into details. However, Finnish daily Helsingin Sanomat reported that the initial response had been hampered by the fact that neither of the Finnish Border Guard’s Dornier Do 228 maritime patrol aircraft were able to fly during the days following the incident due to technical faults. The Dorniers represent the sole Finnish fixed-wing maritime patrol assets and as such the FBG was forced to admit that they had not been able to independently verify that no leaks had taken place within the Finnish EEZ during the first two days following the sabotage. The Dorniers are in the process of being replaced, and has suffered from poor availability during recent years.

A country that has been open with their heightened readiness is Norway. The European oil and gas powerhouse had already before the incidents reported on unidentified drone activity close to their energy infrastructure in the North Sea, and in the aftermath of the incident the Norwegian government has decided on heightened security at the Norwegian oil and gas infrastructure. This includes several vessels of the Navy, which in Norway also include the Coast Guard. Frigates and offshore patrol vessels have been patrolling out at sea, with corvettes guarding shore installations. Additionally, the Army and Air Force are also taking part, and the operation is conducted in all domains, including the subsea and cyber domains.

Assistance from Germany, France and the UK

It is notable that Norway does have a somewhat limited number of vessels able to conduct prolonged operations offshore, and as such Prime Minister Jonas Gahr Støre has accepted offers of help from Germany, France and the UK to increase the security surrounding the North Sea oil and gas infrastructure.

Posted by : Robin Häggblom
Robin Häggblom has a M.Sc. in technology from the University of Oulu and has been working in different positions within the Finnish maritime and defence industry for the last decade. He is also a defence analyst under the nickname Corporal Frisk. 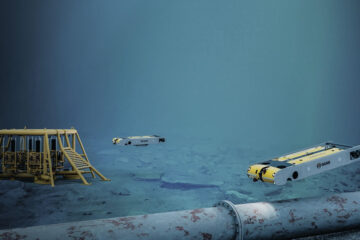 Alix Valenti 20 Oct 2022
During Euronaval 2022, Saab held a press conference to discuss a topic that has gained considerable attention in the past few weeks: seabed warfare.