The largest patrol vessel ever built by Cantiere Navali Vittoria arrived today (November 7) in the port of La Valletta to be handed over to the Maltese government. The new flagship, worth more than €50 million in total and co-financed by the EU under the Internal Security Fund, will carry out surveillance, coastal and offshore monitoring and SAR operations in the central Mediterranean.

Starting from the Chioggia port where it was moored for the completion of sea trials, today it entered the port of Valletta to be entrusted to the Maltese government, the largest Offshore Patrol Vessel ever built by Cantiere Navale Vittoria, Venetian company specialized in the design and construction of military, paramilitary, work, commercial and transport boats up to 100 meters in length.

The unit, a 75-meter long OPV, built in Italy will therefore be the new flagship of the Armed Forces of Malta and will be used in coastal surveillance operations, extended patrols on the high seas and Search and Rescue operations.

OPV P71 is the result of the contract, with a total value of over 50 million euros, obtained by the Venetian company through the participation in a preselection first and in an international public tender then headed by the Ministry of Defense of the island and co -financed (75%) by the EU under the Internal Security Fund (ISF) 2014-2020, the fund established by the Union for the implementation of the internal security strategy, law enforcement cooperation and the management of the external borders of European countries.

“All our design and construction skills are summarized in this record-breaking boat. We have created an OPV capable of responding to all the requests of a particularly rigorous client that is attentive to compliance with very high technical standards and performance. From today, Italian engineering and construction techniques will be at the service of the Armed Forces of the Republic of Malta. With great honor we entrust to the Maltese Government, whom we thank again for the trust placed, a patrol vessel that will guarantee the Armed Forces of Malta an instrument of great support for surveillance and control operations in the heart of the Mediterranean.”

With a full load displacement of over 2,000 tons, a length and width of 74.8 and 13 meters respectively, and a draft of 3.8 meters, the OPV P71 can accommodate a crew of nearly 50 and an additional 20 staff. The platform is characterized by an elevated bridge with 360-degree vision capabilities, equipped with ballistic protection according to level 2 of the STANAG 4569 (NATO standard), with protected side passages for personnel on the main deck and around the same bridge.

The OPV has an aft flight deck, designed to accommodate a telescopic hangar, with equipment for day and night flight operations as well as refueling for a helicopter up to 7 tons such as the AW139 supplied to the Armed Forces of Malta. The aft area below the flight deck features a launch and recovery ramp for a 9.1-meter RHIB with additional space for materials and personnel as well as hatches on the flight deck above for loading / unloading materials thanks to a special service crane placed on the side of the vessel.

A second station also for RHIB of 9.1 meters is located on the starboard side of the platform in the central area of ​​the ship with compensated A-frame crane to launch and retrieve the RHIB even with units underway. Both RHIBs reach a maximum speed of over 40 knots and provide ready aid to the maritime traffic control and search and rescue operations in which the mother unit is engaged. The propulsion of the P71 is entrusted to two diesel engines of 5,440 kW each, of the medium speed type, which move propellers with variable pitch capable of guaranteeing, at full load, a maximum speed of over 20 knots.

Alternatively, the ship can be propelled at patrol speeds between 9 and over 12 knots by two electric motors keyed to the power take-off of the gearboxes (PTI) and powered by two of the three main generators of 750 kW, medium speed, the ship is equipped with: this diesel-electric solution at patrol speed allows greater efficiency, reduced consumption and above all lower harmful emissions for the most widely used speed spectrum of the unit.

The vessel is equipped with two transverse thrusters, one forward and one aft, and retractable active stabilizing fins that guarantee great stability and seaworthiness. Designed and built under the surveillance of the US naval registry ABS, the P71 is equipped with a 25mm remotely controlled weapon and light machine guns of varying caliber while the integrated command, control and navigation system includes a 2D surveillance radar, a navigation radar and satellite communications. 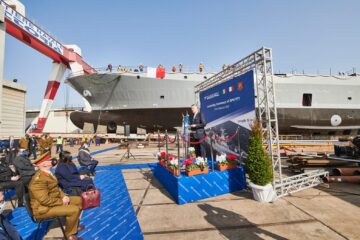 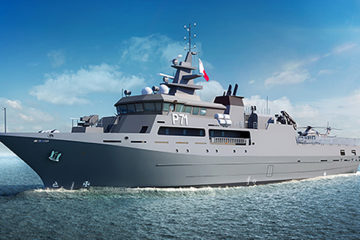 Xavier Vavasseur 07 Mar 2019
Rolls-Royce has secured a contract with Italian shipbuilder Cantiere Navale Vittoria for the supply of a marine propulsion package to a new Offshore Patrol Vessel under construction for the Armed Forces of Malta (AFM). 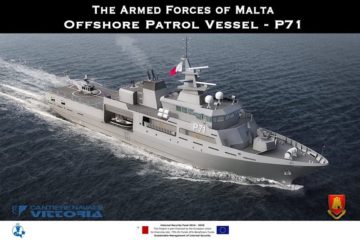 Naval News Staff 21 Jan 2019
On Wednesday 16th January 2019, the Armed Forces of Malta have signed a US$40 million contract for an additional Offshore Patrol Vessel, which will be named P71. The project of asecond and more capable OPV was launched in 2015, and has since then started to take shape.