Kathleen Kennedy Townsend, sixth Lieutenant Governor of Maryland, the sponsor for the future USNS Robert F. Kennedy and daughter of the ship’s namesake, welded her initials onto a steel plate that will be permanently affixed to the ship’s keel and will remain with the vessel throughout its time in service.

Former Secretary of the Navy Ray Mabus declared the John Lewis-class of oilers be named after leaders who fought for civil and human rights. The fourth ship honors Robert F. Kennedy, who served as the U.S. Attorney General from 1961 to 1964 and as a U.S. Senator from New York from 1965-1968.

The U.S. Navy procured its first John Lewis (TAO-205) class oiler in FY2016, and a total of eight have been procured through FY2022, including the seventh and eighth in FY2022. The first six were procured under a block buy contract authorized by Section 127 of the FY2016 National Defense Authorization Act (S. 1356/P.L. 114-92 of November 25, 2015). TAO-205s are being built by General Dynamics/National Steel and Shipbuilding Company (GD/NASSCO) of San Diego, CA.

Current U.S. Navy plans call for procuring a total of 20 TAO-205s. The Navy’s proposed FY2023 budget requests $794.7 million for the procurement of the ninth TAO-205 class ship, and an additional $128.1 million in cost-to-complete procurement funding to cover cost growth on TAO205s procured in prior years.

Here are the main characteristics of the John Lewis-class fleet replenishment oiler. 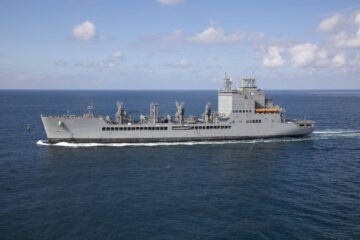