The U.S. Navy launched the missile from a F/A-18 Super Hornet aircraft on November 30 at the Point Mugu Sea Range off the coast of southern California, successfully engaging an operationally-representative, moving maritime target.

“AARGM-ER’s performance during testing continues to validate the missile’s ability to detect, identify, locate and effectively engage critical air-defense targets from an extended range. This test proved the systems’ ability to engage moving maritime targets, a vital capability supporting our Navy’s ability to control sea lanes during conflict. Congratulations to the government/industry team for their continual focus on delivering this crucial capability to our warfighters.”

Northrop Grumman is currently under contract to deliver production units of AARGM-ER to support Initial Operational Capability fielding within the next two years. The company has received a low-rate initial production contract for the first and second lots of AARGM-ER.

AARGM-ER is being integrated on the Navy F/A-18E/F Super Hornet and EA-18G Growler aircraft as well as the F-35 aircraft.

Northrop Grumman is a technology company, focused on global security and human discovery. Our pioneering solutions equip our customers with capabilities they need to connect, advance and protect the U.S. and its allies. Driven by a shared purpose to solve our customers’ toughest problems, our 90,000 employees define possible every day. 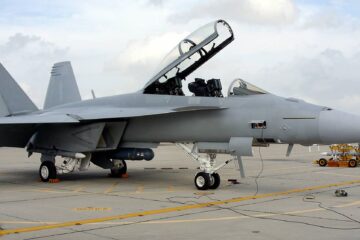