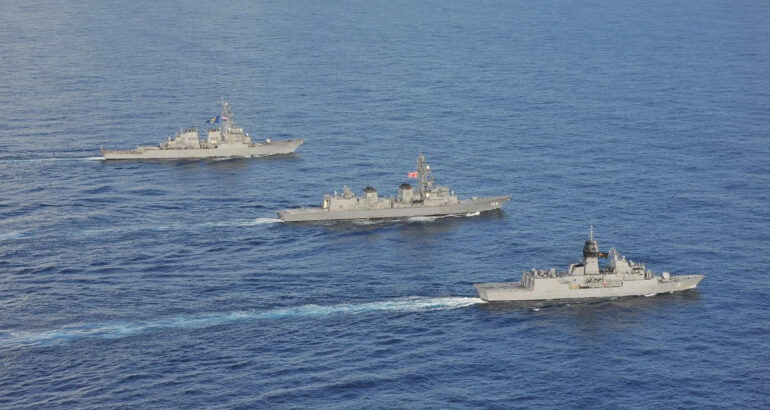 The U.S. Naval Institute (USNI) and the Center for Strategic and International Studies (CSIS) hosted Vice Admiral Karl Thomas, U.S. Navy, Commander of Seventh Fleet. Based in Yokosuka, Kanagawa Prefecture, Japan, the Seventh Fleet has 50 to 70 ships, 150 aircraft, and around 27,000 sailors and Marines and is part of the U.S. Pacific Fleet. Questions to the Vice Admiral were asked by the host and the online and in-person audience.

The Seventh Fleet is the U.S. Navy’s largest forward-deployed numbered fleet and Vice Admiral (VADM) Karl Thomas is the Commander.

“Resolute Dragon is an annual bilateral training designed to strengthen the defensive capabilities of the U.S.-Japan alliance by refining procedures for bilateral command, control, and coordination in a geographically distributed environment and maximize efficiency of firing assets.”

“Everything we do, we try to do it with our allies and partners,” said VADM Thomas who noted that China’s navy often does exercises by themselves. 7th Fleet pays attention to the Russian Pacific Northern Fleet and the U.S. Navy sees them operating out of Vladivostok. There is some coordinated activity with the People’s Republic of China (PRC) and Russia, but not really integrated activity, and not the type of planning that is done by U.S. and allied forces to generate an exercise that is meaningful, noted the Vice Admiral.

VADM Thomas said that there is a contingency plan for Indian-Pacific Command (INDO-PACOM) on where to place forces and that the U.S. Navy is building capabilities around its Seventh Fleet Area of Responsibility.

VADM Thomas commented about F-35Bs operating from America-class big-deck amphibious warships, ballistic missile defense, the PRC’s reaction to Congressional House Speaker Nancy Pelosi’s visit to Taiwan and the resulting missile drills and missile tests in region that can be read at the USNI website.

Regarding manning, fit and fill of crews, the 7th Fleet maintains a 93 to 95 percent fit-and-fill and tries to reach 100-percent manning, said VADM Thomas; however, he admitted that there were times of gaps and that the U.S. Navy looks at every ship and tries to find the properly skilled and qualified individuals to fill the crew.

Regarding forward ship maintenance, VADM Thomas said that the Japanese dock workers at Yokosuka and Sasebo are very good with basic tank and hull work on a ship, but when it comes to ship C5I (Command, Control, Communication, Computer, Cyber and Intelligence), contractors have to be bought in. It is a “Team Effort” and VADM Thomas’s responsibility that the 7th Fleet has safe and prepared ships underway.

Asked about the war in Ukraine, VADM Thomas said that the Ukraine war has a way of uniting the will and people of nations against the aggression and invasion of another nation.

VADM Thomas said that Distributed Maritime Operations with the U.S. Navy and the Japanese Maritime Self Defense Force (JMSDF) have the same purpose to defend an ally, but since the JMSDF is inside the weapons engagement zone, the U.S. Navy sees the defense of Japan from a different angle in the prism [meaning that the U.S. Navy is more mobile in the open ocean].

A reporter asked about Freedom of Navigation Operations (FONOP) and noted that the recent FONOP numbers compared to previous years exercises seem to be less. FONOP exercises are conducted to “throttle up and throttle down based on what we’re seeing,” said VADM Thomas who mentioned that FONOPs are constructed as not to be predictable in the times and numbers that they are used.

The Triton unmanned aerial vehicle (UAV) is entering initial operational capability (IOC) level even though Triton has been operated for some time, said VADM Thomas, responding to a reporter’s question, noting that Triton UAVs will be used to replace some surveillance aircraft. One of the biggest advantages of Triton is its tremendous endurance and persistence. “We’ve operated out of Guam routinely and are working to operate it out of various places in Japan and making sure we have numerous places for it to take off and land.”

A person in the audience asked if 7th Fleet requires more U.S. Marine Corps Amphibious Ready Groups (ARG) to which the Vice Admiral replied, “Presence matters, first and foremost. The more ships we have forward deployed, the more opportunities we have to use them.” One constant ARG forward-deployed is good for competition and the U.S. Navy can surge more if needed. The forward-deployed USS America covers INDO-PACOM for half a year and 7th Fleet tries to deploy an ARG from the West Coast to cover the other half of the year.