During his address, Cavoli thanked Blount for his relentless pursuit of excellence, his distinguished service, and lasting impact on the men and women who served with him. He also spoke of the strength and resolve of NATO.

“NATO is the greatest alliance in human history,” said General Cavoli. “We deter and defend the entire Euro-Atlantic area. MARCOM has played a critical role in shielding Allies throughout the maritime domain by conducting enhanced vigilance activities and being postured to respond to any challenges that might arise.”

Blount has led NATO’s only standing Maritime Component Command since May 2019. As he prepares for his next role as Deputy Supreme Allied Commander Europe, he said he is proud of the MARCOM family he leaves behind. Reflecting on his time at MARCOM, he said he had overseen significant advances in NATO’s naval capability.

“There was a remarkable response in the immediate aftermath of Russia’s invasion of Ukraine,” Blount said. “MARCOM made significant strides towards deterrence and defence of the Euro-Atlantic area.”

Working closely together on exercises and operations, “Allied navies produced an incredible force of ships, submarines and aircraft on active tasks for NATO, providing a present and capable force for the security of all Alliance members.”

“MARCOM has been focused on delivering operational effect. But beyond that we have kept thinking ahead and delivered NATO’s first uncrewed and autonomous systems exercise, integrating the technologies of tomorrow into the Task Groups of today. The crisis in Ukraine has made us an even stronger, more capable Alliance.”

“It has been an honour and privilege to serve as the Commander of Allied Maritime Command. I will miss the vibrancy of the HQ and the brilliance of its people. I have been proud to work alongside each and everyone and I thank you. Equally, I thank your families, and my own of course, for their unswerving love and support. I hand over to an exceptional Officer and friend in Vice Admiral Mike Utley. I can think of no one better to take the helm and I wish him and all those in Team MARCOM every good wish for continued success.”

“It’s an absolute honour and a privilege to succeed Vice Admiral Sir Keith Blount as MARCOM Commander,” he said. “I’m looking forward to working with this highly skilled and dedicated international staff, towards our joint aim – to deter and be ready to defend our Alliance.”

As NATO’s maritime hub, MARCOM is NATO’s focal point for maritime advice and expertise in peace, crisis and war. It collaborates with Allied Navies and a network of maritime stakeholders to lead operations and exercises across the region that demonstrate and sharpen the credible capability of NATO and its Allied Navies. The diverse staff of MARCOM, in concert with the maritime network, help NATO to anticipate issues and work to address them.

MARCOM is empowered to lead robust maritime operations theatre-wide. It is always NATO’s Maritime Theatre Component Commander and when called upon serves as a Maritime Component Commander for specific operations. MARCOM is the central hub for NATO maritime operations, playing a key role in the Alliance’s deterrent posture at sea, commanding NATO’s maritime forward presence, coordinating Allied maritime assets and expanding the agility and usability of the Standing Naval Forces. 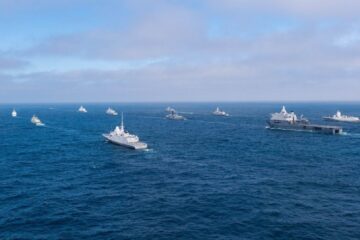