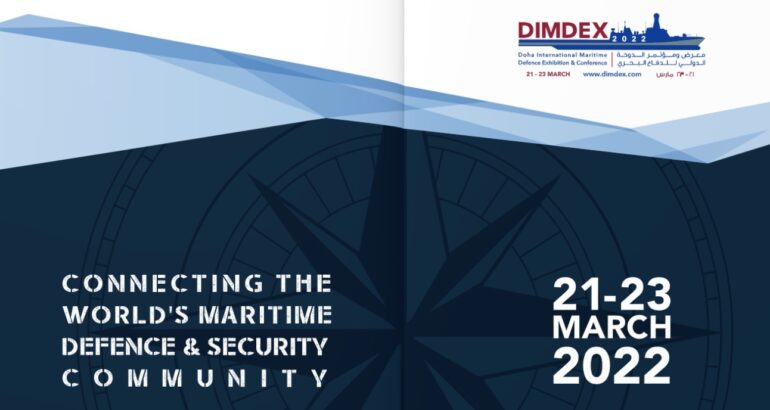 Naval News: With just weeks to go until the start of DIMDEX 2022, what is the current status of preparations for the event?

Staff Brigadier (Sea) Al-Ansari: The organizing committee of DIMDEX is working hard to put the finishing touches on preparations for the much-awaited seventh edition of the event that will be held from March 21-23 at the Qatar National Convention Centre (QNCC). The unbridled enthusiasm shown by exhibitors and sponsors, both domestic and international, prove that we are on track for yet another epoch-making edition.

Even though we are still a few weeks away from the event, over 95% of the space has already been taken. More than 200 international companies from nearly 70 countries as well as members of Qatar’s growing domestic defence industry will showcase their unique products and capabilities at DIMDEX 2022, thus providing a window into the latest innovations in the field of maritime defence and security.  10 countries- China, Italy, France, Germany, Turkey, USA, Canada, UK, Australia, and Pakistan– will have their own pavilions at the event. Three countries – Pakistan, Croatia, and South Korea  – will be participating for the first time in the exhibition. In addition to the impressive line-up of countries that will have exhibitors at the event, more than 80 VIP delegations will attend DIMDEX 2022 to represent their respective countries.

With the complexity of modern-day defence challenges increasing exponentially and defence interoperability becoming a norm, various branches of Qatar Armed Forces – Qatari Emiri Naval Forces, Qatar Emiri Airforce, Qatar Emiri Air Defence Forces, as well as the Qatar General Directorate of Coasts and Borders Security will showcase their capabilities at DIMDEX 2022, thereby gaining access to new and emerging defence technologies. Precautionary measures in compliance with Qatar’s COVID-19 policies and regulations will be strictly enforced to ensure the smooth and safe conduct of the event.

Naval News: You have been associated with the event for a significant period. How satisfied are you with the way DIMDEX has grown over the years?

Al-Ansari: We have indeed come a long way since the inaugural edition. In 2008, we had 85 exhibitors. That number has grown in every edition; in 2018, we had over 180 exhibitors. For DIMDEX 2022, we expect more than 200 companies. The increase in the number of exhibitors has much to do with the fact that the event offers greater scope for commercial success than most other similar shows. We measure progress not only in terms of the increase in the number of exhibitors but also by gauging the impact the event has had on the country’s indigenous defence industry. The impressive strides that the country’s domestic defence companies have made in recent years prove that DIMDEX has been a resounding success on both counts. We will strive to sustain the momentum generated by previous editions through DIMDEX 2022 and future editions.

Naval News: What, in your opinion, has been the impact of DIMDEX on Qatar’s domestic defence and security sector? Do you think local companies will benefit from the upcoming edition?

Al-Ansari: I believe that DIMDEX is one of the primary catalysts for the speedy growth of Qatar’s indigenous defence and security sector.  Although one of the world’s top importers of arms – according to the Stockholm International Peace Research Institute (SIPRI), Qatar’s arms imports increased by 361% from 2016-2020 compared to the previous five-year period  – the country is firmly committed to localization of defence production. Previous editions of the biennial event have resulted in numerous collaborative partnerships between domestic companies and their international counterparts. There have been intangible benefits as well. The exposure and experience domestic companies have gained from being a part of such a prestigious event have helped to raise their profile on the international stage. Local companies have also benefitted from the unlimited opportunities for knowledge sharing that the event provides. With Barzan Holdings, the commercial gateway of the country’s defence and security industry, playing a major role at DIMDEX 2022 as Strategic Partner and Gold Sponsor, I expect local companies to experience major success, during the event and in the future.

Naval News: What are some of the new features of DIMDEX 2022?

Al-Ansari: To start with, the exhibition area has remarkably grown over the years and will be landscaped over 35,000 sqm in the upcoming edition. The vast show floor will host the latest technological innovations and solutions in addition to being a comprehensive networking platform for exhibitors, top military officials, and other key decision-makers from Qatar and other countries.

Judging by the variety of exhibitors that have signed up for DIMDEX 2022, the event will be the most diverse in terms of the variety of products and capabilities that will be on display. A wide range of product showcases, including anti-piracy systems, C5iSR systems, AI software, Electronic Warfare and Intelligence, autonomous systems, as well as advanced weaponry such as precision-guided munitions for naval, land, and air forces will be among the highlights of the upcoming edition.

Participants can also expect to learn more about defence interoperability solutions, the buzzword in modern military circles. Another key feature of the upcoming edition is the Delegation Management System (DMS), a comprehensive online portal by which they can request face-to-face meetings with VIP Delegations. I expect DMS to substantially increase exhibitors’ chances of commercial success.

Al-Ansari: The Middle East Naval Commanders’ Conference (MENC) is a not-to-be-missed component of DIMDEX as it plays a major role in shaping the future course of action against the innumerable threats that confront the maritime domain. The conference assumes additional significance in the present scenario as the threats that the domain has had to face have multiplied in recent years, thus endangering global trade and peace.

Experts are unanimous in their view that of all the challenges that the maritime sector faces, none is of greater concern than asymmetric threats. At the conference, which has “Resilience in the Maritime Domain – Confronting Asymmetric Threats” as its theme, a stellar panel comprising global security experts, doyens from academia, and leading industry figures will attempt to come up with globally acceptable solutions to asymmetric threats. Top-level officials and key decision-makers from around the world, including Ministers, Chiefs of Navies, fleet commanders, as well as other senior navy and maritime defence officials are expected to attend the conference.

Naval News: The visiting warships display is one of the most popular segments of DIMDEX.  What is in store for visitors at the upcoming edition?

Al-Ansari: The previous edition of DIMDEX featured eight warships from seven countries – the U.S., Pakistan, India, U.K., Bangladesh, Italy, and Oman. This time, we expect to have 15-20 warships at Hamad Port, the most at any one edition. I am confident that visitors will welcome the opportunity to explore warships and learn from the leaders and crew about their capabilities and technological features. DIMDEX has hosted more than 80 warships across editions; we are keen to grow this segment even more in future editions.

Naval News: Has the response from sponsors matched your expectations?

Al-Ansari: Most definitely. Fittingly for an event of such major international stature, DIMDEX 2022 has attracted a glittering array of sponsors. Barzan Holdings, which promotes the growth of Qatar’s indigenous defence industry by facilitating international collaborations, is a Strategic Partner of DIMDEX 2022 and also Gold Sponsor. Leading shipbuilder Fincantieri and missile systems developer MBDA are returning as Diamond Sponsor and Gold Sponsor respectively. Dukhan Bank is Silver Sponsor while Mwani Qatar, which manages the nation’s seaports and shipping terminals, has signed up as Silver Sponsor. It is exciting to see that the organizing committee is still getting queries from the industry about potential sponsorship opportunities.

Naval News: Finally, do you have any special messages for international exhibitors at DIMDEX 2022?

Al-Ansari: With the country’s military modernization programme being accorded top priority, there will be plenty of opportunities for established and new companies to partner with Qatar on various projects. I, therefore, expect exhibitors to showcase their full array of new products and capabilities at the upcoming edition. I am also optimistic that the event will further speed up the development of Qatar’s domestic defence industry; I expect DIMDEX 2022 to help lay the framework for growth by facilitating defence technology transfer through joint ventures and other collaborative partnerships.

Xavier Vavasseur 20 Apr 2022
At DIMDEX 2022 French countermeasures specialist Lacroix was showcasing its naval Decoy Launching Systems (DLS) with a real SYLENA MK2 as the centerpiece of its booth.