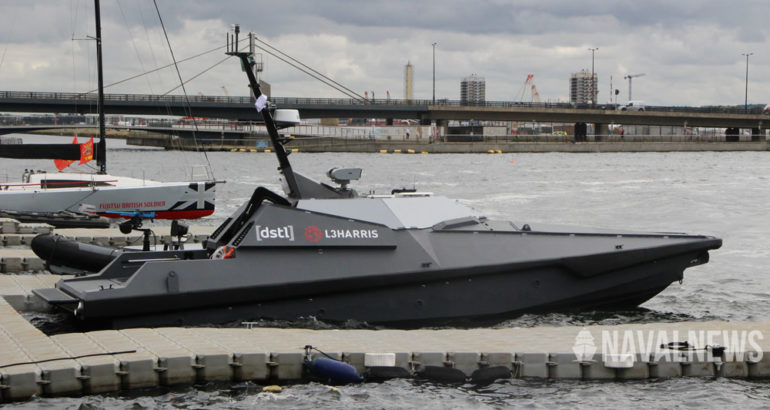 MAST-13, a next-generation unmanned surface vehicle (USV) that could be used to protect the UK's future warships was delivered to Dstl by L3Harris during DSEI 2019.

The USV was demonstrated during DSEI 2019 held last week in London, where it protected HMS Argyll in a harbour force protection. The system, attached to PAC24 rigid inflatable boat, navigated the river bed, detecting possible threats and feeding information back to HMS Argyll. The demonstration was observed by Defence Secretary Ben Wallace.

“MAST-13 is pioneering the future of Unmanned Surface Vehicles for our world-leading Navy. The development of unmanned technology is vital for success in modern warfare, going beyond the capability of traditional ships to attack and defend in uncertain environments. As more advanced technology and new threats continue to evolve, collaborative technology development ensures we are constantly pushing the boundaries to give our armed forces the best capabilities possible.”

Since 2014, L3Harris and Dstl have collaborated to develop ASVs that support new concepts for the Royal Navy and act as a testbed for innovative technologies. ASV supplies the USV to Thales for the UK-French MMCM program.

Predecessor MAST systems developed by L3Harris and Dstl have carried out numerous high-profile operations, including the Royal Navy’s Unmanned Warrior in 2016 and the Australian Defence Showcase, Autonomous Warrior in 2018. MAST 9 is currently in Portugal for the NATO exercise ‘REPMUS’. The high-speed vessel is operating autonomously, beyond line-of-sight, to carry out reconnaissance, interdiction and patrol tasks.