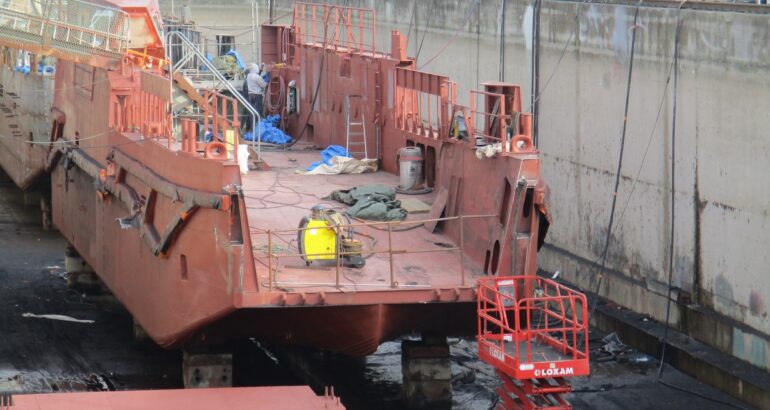 The first two EDA-S, next generation landing craft for the French Navy, are nearing completion at Socarenam ship in Saint Malo. CNIM picture.

Following delays due to the COVID-19 crisis, CNIM and its partner Socarenam are about to launch the builder trials phase for the French Navy’s EDA-S landing craft program. During Euronaval, CNIM Defense and Maritime Director Xavier Montazel details for Naval News the program's latest developments and future steps.

The EDA-S, or Landing Craft Assault (LCA)  for the export market, « has now gone from a paper ship to a real ship, as we are on tracks to deliver the first two EDA-Ss to the French Navy », Montazel explains. A total of 14 EDA-S should be procured by the French MoD to replace an ageing fleet of CTM LCUs. The contract awarded in January 2019 for now includes the delivery of the six first vessels.

The first builder sea trials are scheduled for January 2021. This should normally have taken place in September but the COVID-19 crisis caused a three months shut down at Socarenam, which is in charge of assembling the vessels at its Saint-Malo shipyard. Naval News toured the facility located in Britany back in June this year to see the first two EDA-S taking shape.

Delivery of the first two ships to the French Navy for end-user evaluations is planned for the beginning of March 2021. This assessment will last six months and will take place in Toulon. « The French Navy will carry out all the sea-keeping, speed, laden and unladen tests » Montazel details. A particular emphasis will be placed on maneuvers of embarkation and disembarkation from the Mistral-class amphibious assault ship to the beach and dock.

The EDA-S has been specifically designed to carry the French Army’s Scorpion family of vehicles, the Griffon, Jaguar, Leclerc XLR and Serval. It will thus be able to transport a main battle tank, which the CTM does not allow. « There are plans to test each of these vehicles in the different loading, beaching and dock configurations, » says Montazel.

The first tranche should be followed by orders for a total of 8 additional vessels, that the French MoD can notify in groups of two, four or eight vessels. « Notification of the next tranche is currently scheduled for 2023, but we hope that it is triggered earlier to take advantage of te production series effect» announces Montazel.

« CNIM clearly wishes to bounce back on the qualifications, the first demonstrations and the implementation of the EDA-S in order to be able to offer it to a certain number of countries which may need to renew their capacity in the next two to three years ».

The Netherlands, first, have launched a program now at RFI stage. Australia is expected to follow the move and initiate a replacement program next year.

Naval News also got some fresh news from the LCA’s false twin, the LCX multimission landing craft. While still a paper design, the LCX has already drawn attention from a NATO country in addition to the interest already shown by the French customer. « For the moment, the market is turned towards conventional type vessels, but a potential opportunity is emerging to support less conventional forces ».