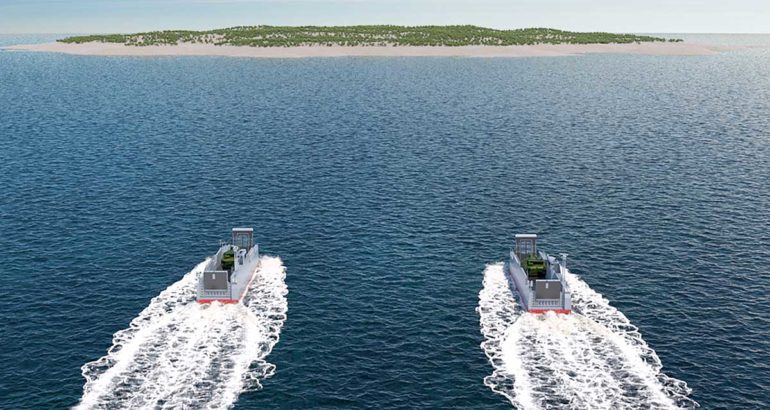 French equipment manufacturer CNIM is right on track and on time to deliver a new generation of landing craft to the French Navy (Marine Nationale), having cut steel of the first EDA-S in October this year.

Awarded  to CNIM in January 2019, the EDA-S (for “engins de débarquement amphibie standards” in French) contract  calls for the delivery of 14 new LCU type landing craft to replace the ageing “CTM” of the French Navy.

“The first steel cut of the first two EDA-S took place in early October at the SOCARENAM shipyard in Saint Malo. We are set to start the builder sea trials in May or June, ahead to a delivery to the French Navy in Toulon at the end of summer of 2020”.

Montazel further explained that four more EDA-S will be delivered between the beginning and the end of 2022 for a total of six landing craft delivered to the customer as part of the first tranche. A second tranche for eight more EDA-S will follow.

Asked about the reasons for the 2 years gap between the first two vessels and the remaining four of the first tranche, Montazel explained that this gap was decided by the customer to allow the French Navy plenty of time to test and familiarize itself with the new ship to shore connector. The qualification test phase will being in the fall of 2020. This phase will include (among other things) tests with the new generation vehicles from the French Army’s Scorpion program. Once that qualification test phase completed, the French Navy may request some minor modifications in the design features of the EDA-S. If this was the case, those modifications would be applied directly to the following four landing craft, hence the two years gap…

On the export front, Xavier Montazel explained that CNIM is either involved in talks or closely watching emerging requirements in Japan and the Middle East for shore to shore connectors and in Australia, India, the Netherlands, Egypt and several countries in South East Asia for ship to shore connectors. Last but not least, CNIM is also promoting its LCX, another new design unveiled at Euronaval 2018, to an undisclosed prospect.