The Navy achieved Early Operational Capability (EOC) for the Long Range Anti-Ship Missile (LRASM) on the F/A-18 in November 2019. LRASM will play a significant role in ensuring military access to operate in the Pacific and in the littorals by providing a long range surface warfare capability.

The AGM-158C LRASM achieved early operational capability with the U.S Air Force B-1B in December 2018, ahead of schedule. A single USAF B-1B Lancer can carry and deploy up to 24 LRASM.

LRASM was set to achieve its Super Hornet EOC at the end of September as we reported, but this was delayed as reported by Inside Defense.

LRASM may soon find its way aboard the B-52 bomber of the U.S. Air Force and maybe, someday, aboard the U.S. Navy P-8A Poseidon.

On the international front, Naval News learned recently that Lockheed Martin is promoting LRASM in Australia

Martin Manaranche 23 Jun 2021
For the first time, the U.S. assumed command of Standing NATO Mine Countermeasures Group One (SNMCMG1) during a change of command ceremony held onboard USS Mount Whitney (LCC 20) and via video teleconference on June 19, 2021. 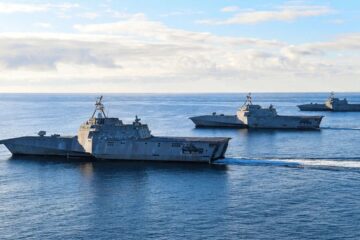