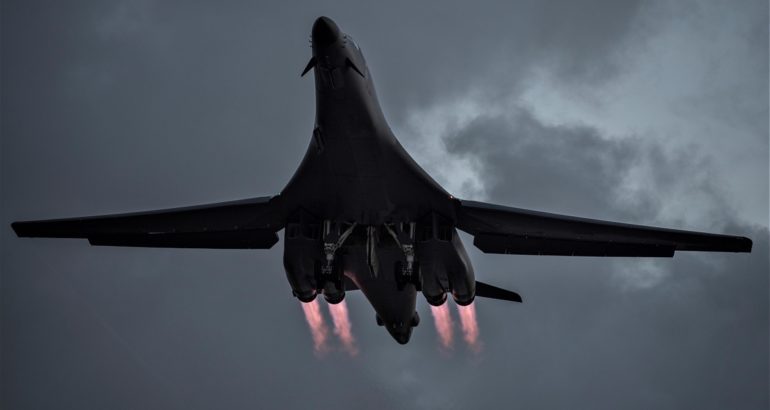 A 9th Expeditionary Bomb Squadron B-1B Lancer takes off from Andersen Air Force Base, Guam, May 21, 2020. In continued demonstration of the U.S. Air Force’s dynamic force employment model, two U.S. Air Force B-1B Lancers flew from Andersen AFB and conducted training in Alaska and near Misawa Air Base, Japan. The 9th EBS, and other units assigned to the 7th Bomb Wing of Dyess Air Force Base, Texas, are deployed to Guam as part of a Bomber Task Force. BTFs contribute to joint force lethality, assure allies and partners, and deter aggression in the Indo-Pacific. (U.S. Air Force photo by Senior Airman River Bruce)

On their way back from Alaska, it appears that at least one of the B-1Bs ventured into the Sea of ​​Okhotsk, Russia’s backyard in the Pacific. It is located between the Russia’s Kamchatka Peninsula on the east, the Kuril Islands on the southeast, Japan’s island of Hokkaido to the south, the island of Sakhalin along the west, and a stretch of eastern Siberian coast along the west and north

For the record, The Russian Navy Pacific Fleet’s Vilyuchinsk base is located in Kamchatka. The Pacific Fleet SSBNs are based there (and so will the new Borei-class SSBNs) and Russia is building special armored shelters to protect its submarines at this location.

According to the USAF press release: In Alaska, the B-1s were joined by F-22s and F-16s out of the 3rd Wing at Joint Base Elmendorf-Richardson, to conduct a large force employment exercise in the Joint Pacific Alaska Range Complex. The crews then flew southwest to Japan where they completed familiarization training in support of U.S. European Command objectives. The bombers then continued south in the vicinity of Misawa, Japan integrating with the USS Ronald Reagan and a P-8 Poseidon to conduct Long Range Anti-Ship Missile training before returning to Guam.

“These missions demonstrate our ability to hold any target at risk, anytime, and anywhere. The training value of these sorties is irreplaceable…our team conducted large force exercise training around Alaska with U.S. Air Force fighters, we conducted multiple standoff weapons training events, as well as integrated with U.S. naval assets along the way. From a readiness perspective, it is hard to think of a more valuable training sortie.”“These missions make the DoD more ready, more lethal, and flat out stronger. Our aviators are getting the chance to coordinate and practice time-sensitive target drills in the Pacific.”

Anti-surface warfare (ASuW) mission are fairly new to the B-1B. The AGM-158C LRASM achieved early operational capability with the U.S Air Force B-1B in December 2018, ahead of schedule. A single USAF B-1B Lancer can carry and deploy up to 24 LRASM.

As Tyler Rogoway from The War Zone puts it, the B-1Bs pose a major threat to America’s adversaries in the region, on land and now at sea.