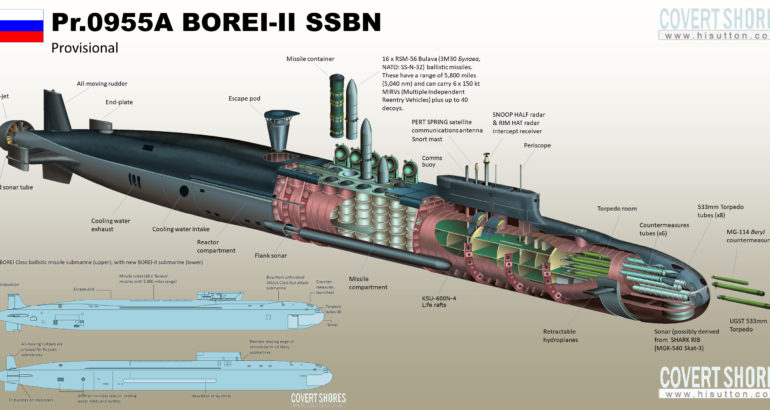 Borei-A-class SSBN of project 955A will operate in the Far East. Five out of eight submarines will serve in the Pacific fleet. The Russian Navy is restoring the Far Eastern nuclear arsenal which was nearly lost thirty years ago.

Experts said Russian submarines were always present in the Pacific Ocean as it is easy to hide in its immense space, the Izvestia daily writes.

The Defense Ministry approved the final deployment plan for project 955A SSBN, sources in the ministry said. Five submarines will be supplied to the Pacific fleet. There is no decision on other SSBN yet. Preliminary plans say at least one of them will also operate in the Pacific fleet.

“In 1990s, the balance was broken. The Northern fleet kept a group of project 667BDRM submarines. It comprised six nuclear submarines which are the backbone of the naval component of the strategic nuclear triad. They have been upgraded of late and can serve for many years. The Yuri Dolgoruky first Borey-class submarine has joined them. The Pacific fleet sustained major losses in political instability. For some time it operated only one SSBN although the Pacific Ocean is good for submarines which can easily hide in its immense waters,”

The Russian Navy actually preserved only one powerful attack force. The situation could not suit the Navy command. The reinforcement of strategic nuclear forces in the east of the country has long matured, the expert said.

The situation is changing. The Pacific fleet operates the Ryazan SSBN of project 667BDR and received two new Borey-class SSBN of project 955 — the Alexander Nevsky and the Vladimir Monomakh.

It is necessary to distribute the forces between two strategic theaters of warfare, Rear Admiral and former nuclear submarine commander Hero of Russia Vsevolod Khmyrov believes. “It will ensure combat sustainability of the naval component of the strategic nuclear forces. Each theater of warfare has its pros and cons. Northern fleet submarines can hide under the ice cap of the Arctic Ocean. The Pacific fleet has Kamchatka coast with numerous bays where submarines can hide. The range of modern ballistic missiles can strike at all strategic targets from there,” he said.

The Pacific fleet will receive upgraded submarines of project 955A. They lost characteristic overhangs in the bow to make the hull more streamlined. The profile of mast housing changed. It no longer narrows to the deck.

Ground infrastructure, new berths, arsenals, water and electricity supplies will be built for the new submarines, Boltenkov said. “In the USSR, it did not meet the necessary criteria and affected combat readiness of the fleet and its operation,” he said.

The construction of special shelters for submarines will begin in Vilyuchinsk in 2020. They are sophisticated facilities comprising a mall and a berth. They are made of reinforced concrete and are 50 meters high. The shelters protect submarines from adversary strikes and natural calamities. The shelters have to provide rapid loading of missiles, torpedoes, fuel and other cargoes. They have to promote major overhaul on site. The erections can accommodate one or two submarines. The internal compartments are separated by massive walls and covered by a reinforced concrete plate against missiles and bombs. Closed berths rule out attacks by combat swimmers, the Izvestia said.