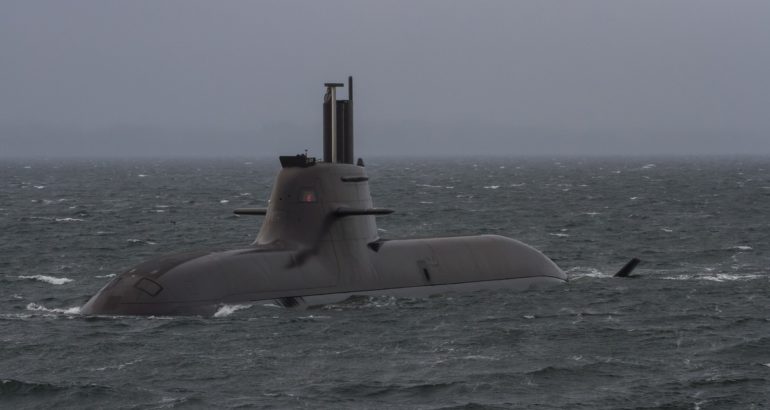 German Type 212A Submarine U33 Back from NATO Patrol Mission

The German Navy (Deutsche Marine) Type 212A submarine U33 entered the naval base and home port of Eckernförde on May 25. 2020 following a patrol mission for NATO's MARCOM.

The ship, led by Lieutenant Commander Tobias Eikermann, has made several reconnaissance trips at NATO’s external border since February and has been under the command of the Alliance’s Maritime Headquarters (Allied Maritime Command, MARCOM) in Northwood (Great Britain) in the past few weeks.

The patrol is part of the NATO Assurance Measures and was focused on observing the activities of the Russian fleet. U33 is one of the first German submarines to be placed under the command of MARCOM and used by its submarine command cell. The reinsurance measures are a sign of the internal cohesion of the alliance and its determination to act externally; they are a pillar of the NATO Readiness Action Plan and date back to the 2014 Wales Summit, where the Allies agreed to an increased presence on the eastern flank.

“We have a special responsibility in the Baltic Sea for the security of the Alliance. Our partners expect us to play a leading role,”

“The Baltic Sea is an extension of the northern flank. For our allies in Poland and the Baltic States it is the only ‘wet’ supply route, a lifeline, with only one natural access. Even in times of crisis, before any emergency, reinforcements and supplies for the population come via this sea route. We must therefore ensure the freedom and security of these routes. This includes knowing who is moving in the Baltic Sea, when, where and with what intentions”.

The German Navy (Deutsche Marine) is not only the largest allied navy with access to the Baltic Sea, but above all has detailed knowledge of the navigatively and tactically demanding area of operations above and below the water. Diving long and undiscovered in the shallow, narrow and busy waters of the Baltic Sea requires crews trained and experienced to the highest standards. The German Navy is the only Baltic Sea riparian of the alliance that can deploy its submarines in the entire Baltic Sea underwater.

In the wake of events in Crimea and Ukraine, NATO adopted the Readiness Action Plan at the 26th Summit in Wales in September 2014. In addition to the Very High Readiness Joint Task Force (VJTF) forces known as the “spearhead”, the plan includes the deployment of reconnaissance and combat aircraft and a stronger presence of naval forces in the Baltic Sea.

Since 2014, Germany has regularly participated in NATO Assurance Measures with ships and boats as well as maritime patrol aircraft in manoeuvres and reconnaissance flights to demonstrate the presence and determination of the Alliance. The Alliance also deploys four permanent naval task forces – two of which have their operational and patrol areas in the North and Baltic Seas and are currently manned by German ships and boats.

The 1st Submarine Squadron includes six Type 212A submarines, the tender “Main”, three fleet service ships, the Submarine Training Centre and the Naval Hydroacoustic Analysis Centre. A total of around 800 men and women serve in the Eckernförder Verband.

Submarines use their long-range sonar and electronic telecommunications reconnaissance systems to collect information undetected and can engage underwater and surface targets. The German submarines are among the most modern conventional (non-nuclear) submarines and are designed for worldwide and long-term missions. Due to their size, design and manoeuvring characteristics, they are particularly well suited for use near the coast, in difficult and narrow waters and in shallow water. With their air-independent propulsion they can remain submerged for long periods. Underwater, special forces can leave a submarine undetected via the torpedo tube, for example for missions to free hostages or for rescue missions.

According to Covert Shores, the Type-212 class (aka U-212) has a reputation for sophistication, largely thanks to its first-use of Fuel Cell AIP (Air Independent Power). It is considered the elite model in the German submarine design list, above the later Type-214 and Type-218 products. And until recently it was also viewed as a ‘not for export’ design, although that has been relaxed for close ally Norway. It is also being promoted to the Netherlands to replace their highly regarded Walrus class. The design is interesting in a number of ways. Find out more at Covert Shores.