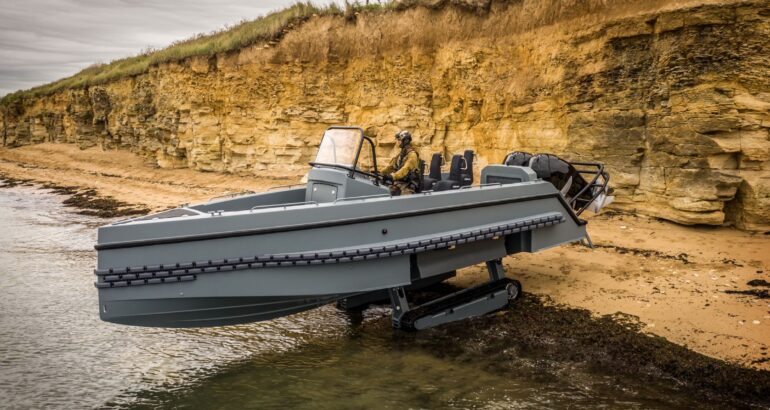 Introducing the new Iguana Pro amphibious craft, the Interceptor. A model made for high-speed interceptions, extractions, surveillance and logistic operations. This amphibious model can land anywhere in soft sand, rocks and mud. Built primarily as a boat, the Interceptor reaches speeds of 50 knots. The Interceptor is the perfect vessel for Law Enforcement, Defence, Homeland Security and Surveillance.

With 12 years of approved reliability, Iguana Pro has just sold 2 Interceptors to the US Navy. The boats are being delivered and they foreshadow a larger order from the US Army.

Coming as a platform, the Interceptor can be adapted to multiple use cases. With expertise in electronics, mechanics, hydraulics, our Research Unit provide specific studies to ensure feasibility and performance of fully customized projects.

Built primarily as a boat

The Interceptor can reach speeds of 50 knots. It offers incredible stability and can negotiate choppy seas with ease. The hull and structure are made in GRP with carbon fiber reinforcement to sustain the constraint of high speed operations.

The Interceptor is also available as a RIB and the deck layout is fully customizable to match users’ needs with options such as tripod reinforcement, crash rails, shock mitigating seats, hard top, underwater cameras.

Fast, versatile and rugged, this 10m boat is made for applications such as border surveillance, port security, high speed interception and law enforcement.

The interceptor is also available as a RIB, with an all-around inflatable tube for a safer and more comfortable experience.

The retractable amphibious tracks of the Iguanas allow the craft to land in sand, rocks or mud shores. Able to operate as an autonomous land based boat, the IG-PRO 31 Interceptor can be deployed very quickly without any specific infrastructure or land vehicle.

It also offers some potential for special forces. Replacing a conventional RHIB, it can allow faster deployment of sea based commandos. The Interceptor being able to move on land, it’s also easier to hide the landing craft ashore during special operations.