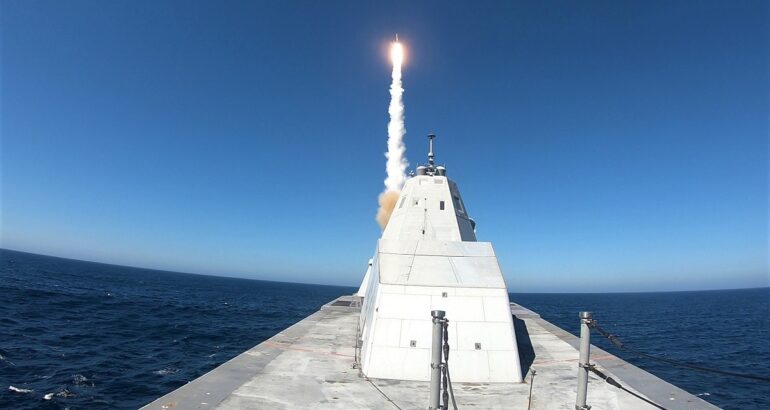 (Oct. 13, 2020) -- The USS Zumwalt (DDG 1000) successfully executed the first live fire test of the MK 57 Vertical Launching System with a Standard Missile (SM-2) on the Naval Air Weapons Center Weapons Division Sea Test Range, Point Mugu, Oct. 13. The ships’ stealth and ability to operate in both the open-ocean and near-shore environments creates a new level of battlespace complexity for potential adversaries. The Zumwalt class will also operate as a key enabler in the acceleration of new warfighting capabilities and rapid development and validation of operational tactics, techniques, and procedures.

“Today’s successful test not only demonstrates the ship’s capability to fire missiles and conduct self-defense, it is also a significant step toward more advanced combat system testing and operations for our Navy’s most technically innovative warship. The USS Zumwalt crew and Surface Development Squadron One are working hand-in-hand with the acquisition community to advance this ship’s operational capability.”

The test highlighted five Raytheon Missiles & Defense-produced systems, spanning the radar’s detection of the incoming threat to the missile’s interception:

Under the coordination and control of the TSCE, the mission included several first-ever milestones: firing of a SM-2 Block IIIA from a DDG 1000 ship class; firing from a MK57 VLS; and use of the SPY-3 radar for in-flight support of the SM-2’s upgraded guidance system.

“From radar detection to missile intercept, our systems were at the heart of this successful test and continue to provide a vital role in defense of ships and sailors around the globe,” said Kim Ernzen, Naval Power mission area vice president at Raytheon Missiles & Defense.