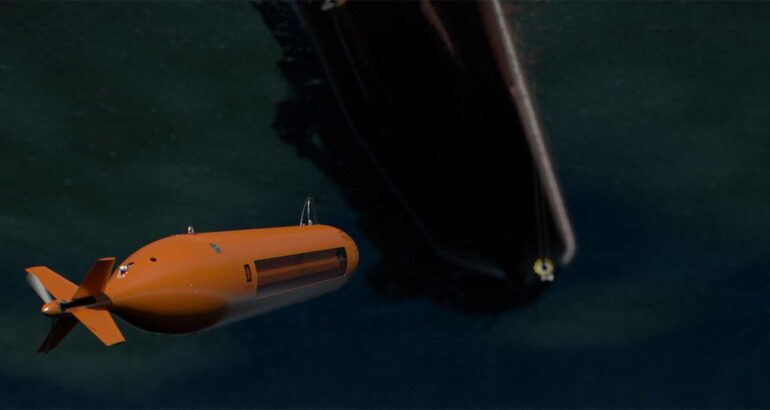 The French defense procurement agency (DGA) has awarded a contract to Norwegian manufacturer Kongsberg Maritime for the implementation by the French Navy of the Hugin Superior Autonomous Unmanned Vehicle (AUV), which can operate at depths of up to 6,000 meters.

This contract awarded on August 12, 2022, of a maximum amount of about €4 million, provides for several sea trips of this underwater drone. These campaigns are part of the exploratory capacity of the French seabed control strategy.

As part of this strategy, the French Navy conducted a first operational campaign in October 2022 to implement an exploratory capability of deep-sea underwater drones. The objective is to have autonomous underwater systems capable of operating at great depths. This first campaign consisted of the operational deployment of the hydrographic and oceanographic vessel ‘Beautemps-Beaupré’ from Brest, with the Hugin Superior vehicle. The DGA naval engineering expertise and test center participated in the specification of the requirement. It will also participate in the feedback of these missions for the future specification of the means to be developed for the French Navy.

This first step in defining an exploration capability is based on the rental of various French and European AUVs or remotely operated vehicles (ROVs), available on the market, which are intended to be used during campaigns at sea. Thanks to these campaigns, the DGA and the French Navy will be able to refine and define the concept of using this equipment.

A second stage, defined in synergy with the “France 2030” investment plan, will eventually provide future deep-sea capabilities in a sovereign manner.

The HUGIN Superior AUV System is one of the most capable and commercially available AUVs. It offers data quality and coverage coupled with the most accurate navigation and positioning solution there is. Packaged as a complete system, HUGIN Superior carries more sensors than ever before over greater distances enhancing productivity and cost-effectiveness.

According to the company brochure, Hugin Superior is available in a single fixed-configuration, rated to 6000 meter depths.