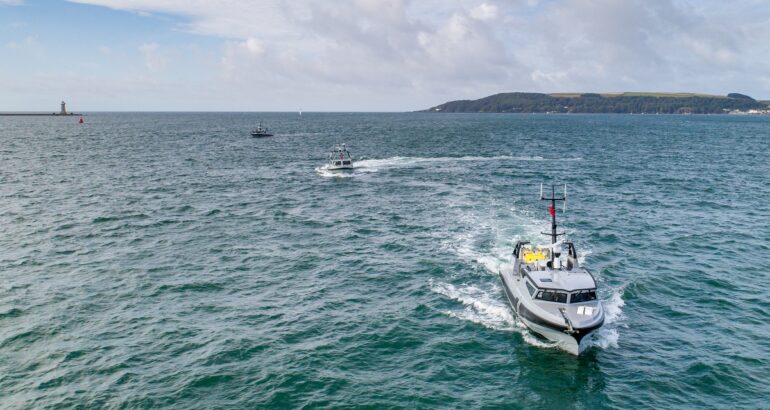 From the end of September until October 6, 2022, the French Navy's future mine countermeasures system SLAM-F was cpitted against the in-service mine warfare capabilities.

The French Navy Mine Countermeasures Flotilla (FLCM) confronted the first mine warfare drones (modules de lutte contre les mines – MLCM) of the SLAM-F (Système de Lutte Anti-Mines du Futur) program with a Tripartite-class MCM vessel. The test took place in an area of ​​the harbor in Brest where the seabed is particularly challenging. The SLAM-F system is currently undergoing operational evaluation by the French Navy’ surface test and evaluation center (CEPN).

This evaluation made it possible to compare the performance of the current capabilities with those of the prototype unmanned system. The two systems were then implemented in order to relocate, by comparison, as many “mines” as possible (inert targets representative of the known threat) among the ten moored for the occasion.

This comparison of performance between the legacy in-service system and the future systems already promises rich feedbacks, the French Navy said. The new generation combines side-scan sonar offering breakthrough resolution with autonomous capabilities to reduce mariner exposure inside the minefield.

The analysis of this exercise will allow the FLCM and the CEPN to progress in the planning and conduct of drone operations, as well as in the measurement of sonar performance, which will be used to lay the first bricks of the future mine countermeasures doctrine.

This exercise also enabled the crews to become familiar with the new systems and their latest generation software. SLAM-F program is underway, with delivery of a first MLCM unit expected for next year. The three remaining ones are to be delivered after 2023.