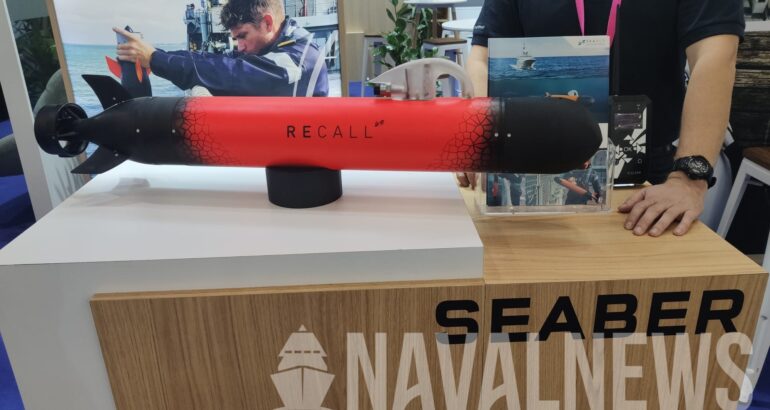 At the heart of naval warfare, anti-submarine warfare requires constantly trained and well-coordinated personnelwithin navies. To enable them to focus on their mission, facilitate logistics and reduce costs, while respecting wellestablished military training and operations doctrine, SEABER is innovating alongside operational and ASW experts by developing RECALL®.

RECALL® is the newest member of the micro-AUV family and is designed as a training target capable of realistically reproducing submarine noise and motion, integrating different training modes such as passive, active and combined acoustics. RECALL® is compatible with modern sonar and torpedo systems.

It has all the makings of a big one, the RECALL® micro-AUV navigates at 12 knots and dives to a depth of 300 meters. Measuring only 90 cm long, 12 cm in diameter and weighing only 10 kg, RECALL® has a low logistical footprint and can be easily deployed within 10 minutes by any operator from surface ships or helicopters.

Particular attention has been paid to the robustness of the entire system and ease of use by non-experts in robotics, with an intuitive and ergonomic human-machine interface design that makes it easy to program the most complex missions in harsh environments. Aptly named, this innovative micro-UAV is equipped with the SEACOMM (UHF) recovery module for rapid location and recovery at sea.

The development of RECALL® is supported by the French Ministry of Defence (Agence Innovation Défense), the RECALL® micro-AUV will be available in the coming months.