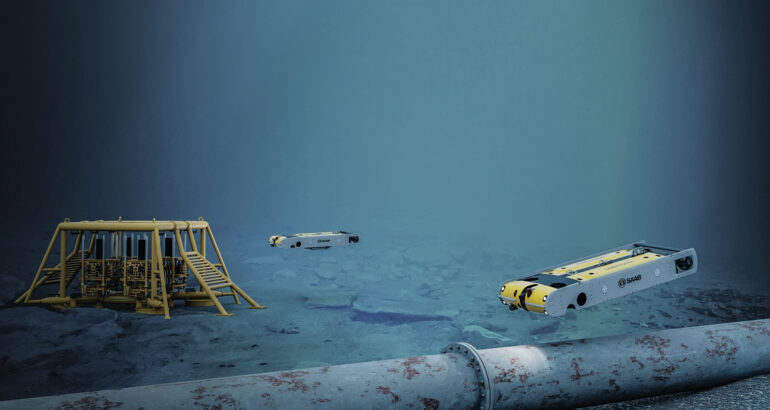 During Euronaval 2022, Saab held a press conference to discuss a topic that has gained considerable attention in the past few weeks: seabed warfare.

During the briefing, Saab highliged the key technologies it is developing to support navies in this domain.

The explosions affecting the Nord Stream pipelines in the Baltic Sea, on 26 September, have been a wake-up call for many nations and nation’s navies: the underwater domain is no longer just the realm of Anti-Submarine Warfare (ASW). It now extends all the way down to the seabed, where critical infrastructure such as communications cables, pipelines, renewable energy cables and data storage need protection.

As such, while the world continues to speculate on the causes of the Baltic Sea explosions, navies and industry are seeking ways to take defence to new depths.

“At Saab we believe that defence requirements will be twofold: defensive, in order to protect critical infrastructure, and offensive, to carry out expeditionary seabed warfare,”

Offensive requirements will typically include interdiction, monitoring and reconnaissance of potential threats to seabed infrastructure. Defensive requirements will, on the other hand, focus on monitoring and surveying the seabed to maintain constant awareness and be aware of any changes to the situation. “The latter is likely to be the fastest developing area, as it will largely be based on technologies that already exist and can be adapted to the new environment,” Lade noted.

To this effect, Saab can already offer a number of capabilities, such as its A26 submarine, two of which have been order by the FMV (Swedish Defence Materiel Administration) for the Royal Swedish Navy. Among other things, the A26 features a Multi-Mission Portal, designed specifically for the launch and retrieval of both manned and unmanned – such Remotely Operated Vehicles (ROV) and Autonomous Underwater Vehicles (AUV) – vehicles.

Saab’s Sabertooth, a lightweight hovering inspection, maintenance and repair (IMR) platform, initially developed for the commercial sector, would equally work well for defence seabed warfare. Currently the system can work both as an ROV or AUV, which does require that the system be managed by a capability nearby. “We have been working on developing a garage system where AUVs such as Sabertooth can park to regularly relay the data they have been gathering,” Lade said. The data can then be relayed by the garage through a cable directly connected to shore or by deploying a buoy to the surface to send it via, for instance, satellite link – although the latter is currently only speculation. Saab’s seabed AUV garage has been tested already at NASA’s space centre in the tank where astronauts train. It is not yet operational.

“There are still several challenges to tackle before being able to offer systems that can work at 6000m depths,” Lade told the press. Operating at 6000m depths means that current systems get heavier as they go to higher pressures, requiring more power to operate. Additionally, high pressures can also affect some of the systems onboard. Finally, in order to transfer power from the surface down to 6000m depths requires the right format (AC/DC or DC/DC) and this has yet to be determined. “As such, currently, both the garage and the Sabertooth operate up to 3000m depths,” Lade concluded.