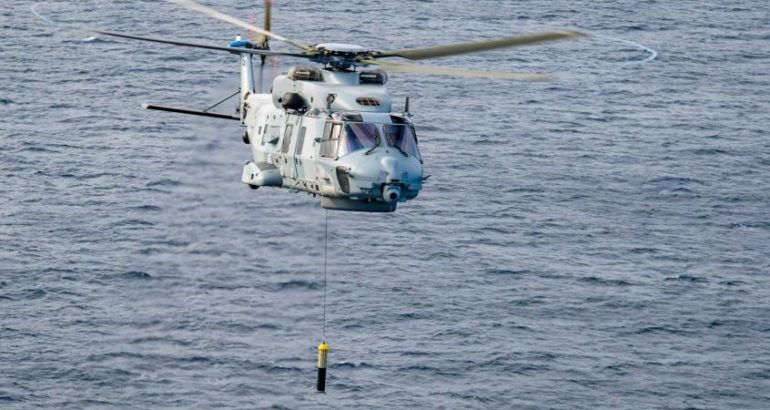 On its stand at Euronaval, Thales was displaying a suite of solutions to detect with, connect to and effect against unmanned systems. On the detection segment, Xavier Mesnet, Thales' Naval Segment Director, told Naval News about a small diameter cable...

The focus for now: A small diameter cable...

There are two key challenges in Anti-Submarine Warfare (ASW): detecting without putting the ship – and its crew – in harm’s way; and being able to continuously track the submarine. Detecting and tracking, today, involves triangulating information received – initially – from a ship’s sonar with information received from sonobuoys and dipping sonars launched and operated by Maritime Patrol Aircraft (MPA) and ASW helicopters.

“Thales is now seeking to develop technologies that will also integrate unmanned systems in ASW operations,” Mesnet told Naval News. And one interesting way to do so is to develop solutions enabling Unmanned Aerial Vehicles (UAV) to carry dipping sonar and act as trackers.

“The technology to launch and operate dipping sonars from helicopters today is too heavy and inadequate to be fitted onto UAVs, so Thales developed a small diameter cable.”

The small diameter cable is “less than 3 mm thick” and has an impressive length of “about 700 meters”. It is made of synthetic material and is not only strong enough to carry the weight of the dipping sonar, but it also transmits information from the sonar to the UAV. Once the UAV receives the information it relays it to all the other platforms – MPA, helicopter and/or ship. The use of this cable to enable tracking via UAVs offers more flexibility and speed: as the submarine moves, the UAV can simply roll the cable back in to extract the dipping sonar from the water – an operation far less cumbersome than reeling the sonar back into a helicopter – and move to the next position to deploy it again.

Both UAV and dipping sonar can function in full autonomy or remotely operated from the mother ship, “according to customer needs.” However, Thales is currently neither disclosing potentially interested customers nor Technology Readiness Level.

Thales very much keeps the lid on this promising technology: While the small diameter cable was showcased on their booth at Euronaval, pictures were not allowed. Thales didn’t wish to disclose how data travels in the cable, but the use of fiber optics is the most likely option.