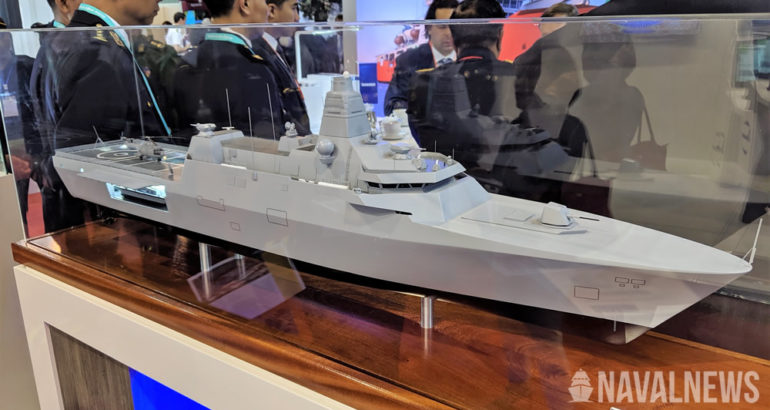 At this year's IMDEX Asia, Dutch shipbuilder DAMEN unveiled a new variant of its CROSSOVER design specifically configured to answer the future MRCV requirement of the Republic of Singapore Navy.

The variant of the CROSSOVER specifically designed for the Republic of Singapore Navy’s (RSN) future MRCV requirement was showcased on DAMEN stand in a 1:100 scale model. It is based on the “XO 131C” baseline variant of the CROSSOVER, configured as a surface combatant. Other CROSSOVER variants include Security, Fast Security, Amphibious, Fast Combatant. The first three are built according to commercial standards while the last two and the Combatant are 100% military/naval grade.

The CROSSOVER XO 131C is 130 meters in length (as are most designs being pitched for MRCV, likely an indication of an early requirement by the RSN eventough no RFI has been issued yet). It has a beam of 19.6 meters and a displacement of 5,300 tons.

Its maximum speed is 28 knots and crew complement 108 to 125 sailors plus accommodation for an extra 128 personnel.

The scale model on display at IMDEX Asia 2019 was fitted with a 76mm main gun, 2x Millenium CIWS, 8x anti-ship missiles and an integrated mast featuring a radar with four fixed panels.

The most interesting feature of the CROSSOVER is not related to the sensor or weapon suite however, but rather its “X-DECK”, a single, flexible deck to handle, store, operate and deploy mission equipment, fast RHIBs, landing craft or, in the case of MRCV, USV, UUV and UAV (from the flight deck).

The scale model featured 3x landing craft and 2x RHIBs below the helicopter deck. These can be deployed via a a convertible slipway/beach at the stern or via the X crane system: An integrated crane and davit system port, starboard and astern.

Talking to Naval News, Pieter Heijboer, Naval Sales Support at DAMEN explained that the CROSSOVER is a new design which was introduce to make the next step in what frigates can bring in capabilities at sea.

We will offer this CROSSOVER design as the MRCV requirement of the Singapore Navy.

The future MRCV or Multi-Role Combat Vessels will replace the ageing Victory-class Missile Corvettes, which have served with distinction since 1989. Delivery is expected to begin from 2025, with full delivery expected around 2030. The RSN has yet to issue its requirements for this future program however some information about it appeared recentlywhen Singapore MINDEF outlined its future procurement plans