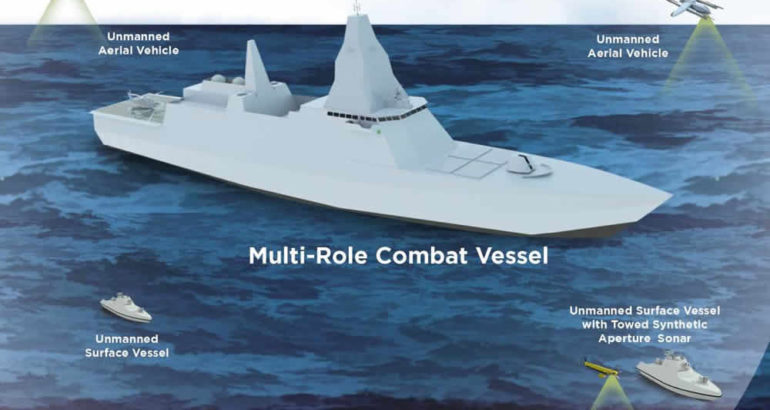 In a document titled “Building the Next Generation Singapore Armed Forces”, Singapore’s Ministry of Defense outlines the future of the nation state’s forces in 2030 and beyond, as well as some of its procurement plans.

On the naval side, the document outlines three major programs:

The Invincible-class submarines will replace the current ex-Royal Swedish Navy Archer– and Challenger-class submarines, which the Republic of Singapore Navy (RSN) has operated for over two decades. Design and built by Germany’s TKMS, Invincible-class submarines are equipped with significantly improved capabilities. They are being fitted with Air Independent Propulsion systems based on Fuel Cell technology, which will allow the submarines to stay submerged about 50% longer. They are also carrying a combat system designed by both Atlas Elektronik and ST Electronics. The first of class has just been launched. All four submarines are set to be delivered to the RSN by 2025.

The new Multi-Role Combat Vessels will replace the ageing Victory-class Missile Corvettes, which have served with distinction since 1989. Delivery is expected to begin from 2025, with full delivery expected around 2030.

The JMMS are set to replace the ageing Endurance-class Landing Ship Tanks in the next decade.

The document further explains that Singapore’s Armed Forces will build a more hybrid force, incorporating more unmanned platforms. These unmanned platforms will complement traditional manned equipment, to enhance responses across the full range of operational scenarios. The SAF of 2030 and beyond has been designed to be operated with a leaner manpower pool, and factors in the reduction of manpower supply by a third after 2030.

Naval News – With the three naval programs outlined in the “Next-Generation SAF” document, (Invincible-class, MRCV and JMMS) do you see the RSN keeping it’s status of “most modern and best equipped Navy in South East Asia” ?

Collin Koh – Though I’ll first put a caveat that no one Navy is the same, as its force structure and overall capacity, capabilities and readiness levels are a result of a mix of domestic and external factors. So it’s not a straightforward exercise to compare navies. I’ll hence safely say that with the mentioned future acquisitions the RSN is poised to remain one of the most technologically advanced and modern navies in SE Asia. It’s been doing well in keeping with not only technological trends but also present and anticipated future requirements.

Naval News – On paper it looks like all three programs are just role for role replacements of existing vessels in the RSN fleet. But isn’t the RSN actually gaining new capabilities with these new programs (as was the case with the LMV program) ?

Collin Koh – Not really. For example, in the future we won’t have a dedicated MCMV fleet as we will combine the MCM functions into other platforms such as MCRV and LMV. The trend is towards multi function – to pack as much capabilities into a smaller pool of larger platforms, with modular “plug and play” in mind. This is not only the result of future tech, operational needs but also in view of future financing as well as most importantly, manning levels given that Singapore has been facing a persistently low total fertility rate, which continues to affect manpower levels of the whole armed forces, not least the navy. The idea is therefore to rely on less but more flexible and versatile assets, maximizing use of automation and unmanned technologies.

Naval News – When did the MRCV program surface ? Do you believe that these vessels will be procured from foreign shipbuilders or is the local shipbuilding industry (namely ST Engineering) fully capable of designing and building such vessels ?

Collin Koh – I must admit I’ve no privy info on this so I’ll assess based on the existing info I have. I suspect it surfaced around the mid 1990s when, before the decision was settled on the frigates based on the La Fayette, the RSN was looking at a larger, corvette class vessel. Back then there’s already thought of developing the design and build such a ship domestically. Given that ST Marine has been able to license build the Formidable class frigate and LMV, and even OPV-sized vessels for exports, it’s most likely that the MRCV will be designed and built locally.

Naval News – While the JMMS program has been known for at least a couple of years, there are very little details about it in the “next gen SAF” document and no precise schedule. What is the reason in your opinion ? Have the requirements been set yet ? Do we know if the design will be an LPD or an LHD for example ? (ST Marine unveiled a new LHD design during IMDEX 2017)

Collin Koh – When there was first discussion about this project a few years back there’s already a plan in the long term to replace the existing Endurance LPDs. Then, typhoon Haiyan impressed upon the need for a landing ship with better aviation capacity since landing craft may not be able to traverse debris strewn disaster zones. But the plan was likely put aside due to funding constraints. In fact, as an example, it was reported that RSN was interested in a fleet replenishment vessel, based likely on a ROPAX concept, but it was then shelved due to funding constraints and because it’s not seen as a priority. It’s likely that the JMMS, based on existing hints from MINDEF, will be a LHD type vessel meaning a through-deck carrier-like ship.

Collin Koh is a research fellow at the Maritime Security Programme, S. Rajaratnam School of International Studies in Singapore.