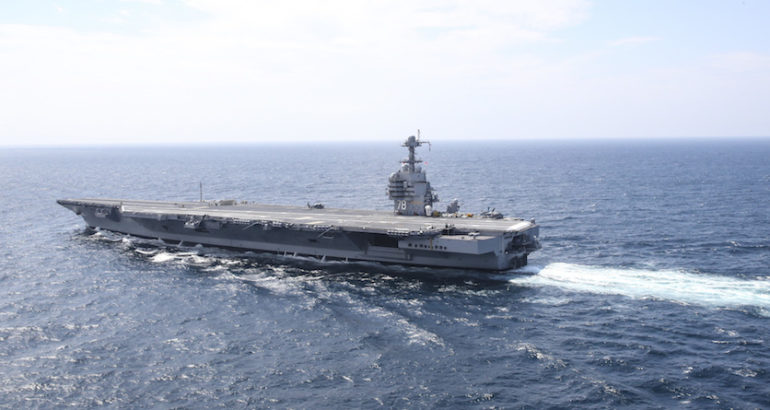 Nearly one month following the acceptance of its first advanced weapons elevator (AWE), the US Navy’s newest aircraft carrier, USS Gerald R. Ford (CVN 78), has accepted its second, the service said on March 6.

AWE Upper Stage #3 was turned over to the ship February 14, following testing and certification by engineers at Huntington Ingalls Industries-Newport News Shipbuilding (NNS), where the ship is currently working through its post-shakedown availability (PSA).

According to Ford’s Weapons Officer, Cmdr. Joe Thompson, acceptance of the second AWE offers an opportunity for Ford Sailors to become acquainted with the equipment during the PSA.

“This gives us more time to learn and become subject matter experts,” explained Thompson. “All of us are learning on brand new systems and brand new concepts. This acceptance gives us the opportunity to have that ‘run time’ on the physical aspects of the elevator, but also in evaluating the technical manuals, and learning the maintenance required to keep them operational.”

“This is going to allow us to progress faster,” he explained. “As we get smarter on one, we move on to the next and apply the lessons learned not only with regard to elevator operation, but also in the testing and certification, and maintenance processes.”

“We are glad to be able to accept the second AWE,” said Chief Machinist’s Mate Franklin Pollydore, leading Chief Petty Officer for G-4 division – the team currently training on the AWEs. “Having a second AWE will give us the opportunity to apply everything we have prepared for while allowing us to utilize all the experienced gained since AWE Upper Stage #1 was turned over to the ship.”

Upper Stage #3 is located in the ship’s aft weapons handling area, giving the ship two upper stage elevators in each of its handling areas – one forward and now one aft. The dedicated weapons handling areas between the hangar bay and the flight deck are unique to the Ford-class and eliminate the need for a “bomb farm” like those of Nimitz-class carriers while reducing horizontal and vertical weapons movements to various staging and build-up locations.

Thompson, with more than two decades of weapons handling experience, explained that while the dedicated weapons handling areas offer advantages in speed and lethality, they also offer gains in the safe handling of ordnance.

“From a weapons safety perspective, this is a huge advantage,” he said. “We have two dedicated locations that are not on the flight deck or in the hangar bay that have 24-7 overhead sprinkler coverage and the ability to jettison in the case of an emergency. To have these locations that allows us to operate without interfering with flight operations or in the hangar bay makes our ship that much safer.”

Acceptance of the elevator was accelerated due to a merging of the test programs between NNS and the Naval Surface Warfare Center (NSWC), which removed redundant steps and moved certification up by 10 days. The team has identified other areas where redundancy can be removed to make the acceptance timelines more efficient. For Ford’s Commanding Officer, Capt. J.J. Cummings, the process improvement again showcases the talent of the collective team of professionals working to bring these elevators online and bring Ford closer to operational employment.

“The combined efforts of NNS and NSWC to remove inefficiencies in the test program highlights how well our teams are working together,” Cummings said. “I couldn’t be more proud of the work being done by our Sailors, and our teammates at NNS; Supervisor of Shipbuilding Newport News; Commander, U.S. Naval Air Force Atlantic; PMS-378; and NSWC to make this happen. These are the most technologically unique elevators in the world, and we are going to need to find innovative methods to get the remaining nine elevators delivered this year.

“Our Weapons Department Sailors are hungry to operate these elevators so we can start developing procedures to maximize the flow of ordnance from our magazines to the flight deck,” he said.

“This is a huge step for us,” said Thompson. “With one forward, and now one aft – this brings us one step closer to being a truly lethal Weapons Department.”