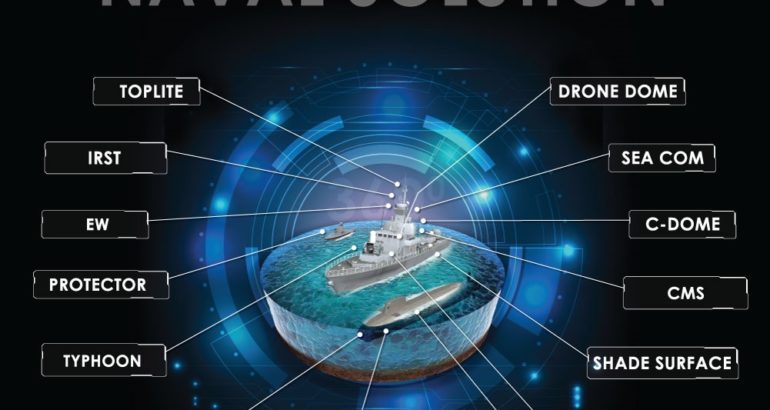 Rafael Advanced Defense Systems Ltd. chose IMDEX Asia 2019, held from 14-16 May at the Changi Exhibition Center in Singapore, to pitch its 360° multi-layer naval defense solutions. Among them are the C-DOM naval variant and the Sea Spotter naval IR staring and tracking system.

C-Dome components include a multi-round launcher assembly loaded with vertically-launched canisterised interceptors. The launcher is installed under the ship deck.

C-Dome utilizes the ship’s own surveillance radar and does not require a dedicated Fire Control Radar. Weapon System Command and Control is seamlessly integrated with the ship’s combat management system, facilitating system operation.

C-Dome uses the combat-proven Iron Dome interceptor that has already achieved more than 2000 successful interceptions. Interceptors are maintenance-free, and are stored in a sea-proof canister. Up to 10 interceptors can be loaded into a modular Vertical Launcher Unit.

Interceptors are vertically launched with unrestricted 360° azimuth coverage. The highly advanced warhead ensures high kill probability against a wide range of targets. The C-Dome interceptor is extremely agile and with a high rate-of-turn enabling intercepting of even the most maneuverable targets. Its state-of-the-art proximity fuze maximizes lethality and its powerful warhead ensures target destruction. C-Dome has recently been declared operational by the Israeli Navy.

The Sea Spotter is an advanced Naval IRST system that will enable a naval vessel to   automatically locate and pinpoint threats and targets located around it without being exposed to enemy systems.

The system, dubbed Sea Spotter, is a new generation (third generation) infrared staring system that is capable of automatically locating both surface and airborne targets, super sonic and slow, very small targets above and around the vessel, from horizon to zenith and transferring the data to the ship’s combat system for interception.

Based on infrared sensors, the Sea Spotter is a completely passive system. Unlike electromagnetic radar systems, it does not emit any signals, so that as part of its situational awareness, it can “see” but not be seen without emitting any beams and without giving away the ship’s position.

The overall target and battle arena image that is produced by the Sea Spotter is able to locate such threats as surface-to-surface missiles, super sonic and sub sonic  sea skimming missiles, combat aircraft, gliding bombs, ARM weapons  helicopters, ships, small target vessels such as a submarine periscope and/or terrorist threats like jet skis.

Previous generation IRST systems suffered from a high false alarm rate, which makes them inefficient and useless. Third generation systems such as the Sea Spotter are based on a continuous staring sensor (not a scanning sensor), which coupled with suitable image processing algorithms, greatly decreases the number of false alarms to a rate of one false alarm per 24 hour period.

The Sea Spotter system is designed for all naval vessels and is based on two specific patents and on an image processing ability that is one of Rafael’s leading capabilities. The patents are in the field of time sharing between a few telescopes in a high frame rate and a central close cycle cooling system.

Tayfun Ozberk 28 Sep 2021
The Sea Breaker, the latest anti-ship missile from Israeli defense company Rafael, was on display at the DSEI-2021 defence industry exhibition, which took place in London from September 14 to September 17.

Xavier Vavasseur 15 Sep 2021
Day 1 at DSEI 2021 in London, UK. We focused on new anti-ship missiles, the Sea Breaker by Rafael, the Sea Serpent by IAI and Thales UK. We then take a look at two new OPV designs: The VARD 7 115 NGOPV and the MPV 80 by OMT. We then discuss with SH Defence about "The Cube" modular mission module.