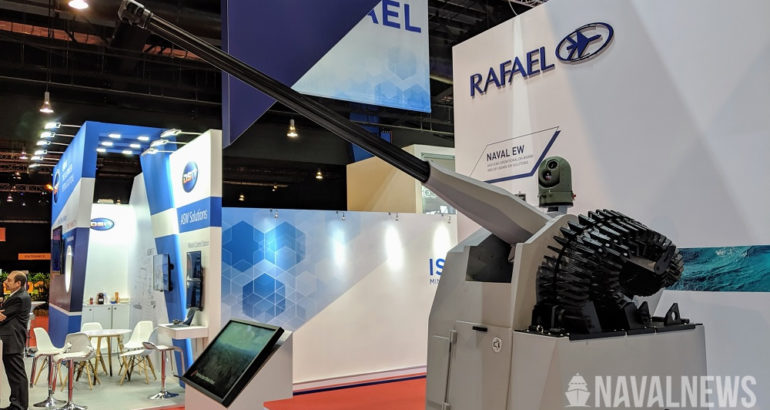 With 70 degree elevation, coupled with ABM, the Typhoon Mk-30c can defeat small and medium UAS including the latest emerging drone threats.

It is the first time that Rafael is showcasing an actual, full size, Mk-30c gun system at an exhibition. IMDEX Asia 2019 is the international maritime defense exhibition currently held in Singapore.

It benefits from the experience gained by Rafael over two decades of R&D greatly enhanced by actual experience of its customers. In this new product, emphasis was put on compact design, ease of maintenance, low Life Cycle Cost (LCC), and on extending the capabilities against the latest emerging aerial and asymmetric swarm attack threats.

The Typhoon Mk-30c incorporates an on-mount Electro-Optical Director with a state-of-the-art Fire Control System to optimize effective surveillance and engage threats in all weather conditions, day and night. Its high level of stabilization and pointing accuracy, result in a high hit probability, even against small and fast maneuvering targets. The system can be operated 24/7 in surveillance mode, offering multi-mission capability to the ship.

The Typhoon Mk-30c fires all NATO standard 30×173 ammunition with adjustable rates of fire, from single shot, up to 200 rounds per minute. Its magazine holds 200 ready rounds on mount. With 70 degree elevation, coupled with ABM, the Typhoon Mk-30c can defeat small and medium UAS including the latest emerging drone threats.

The Typhoon Mk-30c is operated by a proprietary remote operator console, ergonomically designed for easy and safe operation in the harsh maritime environment. When installed in a standalone configuration, the system achieves its high performance relying solely on its own sensors. Alternatively, it can be integrated to the ship’s CMS. In this configuration, it can be operated exclusively from the CMS or with the CMS as a secondary operating console.

Exhibiting a superior value-to-price ratio together with significantly lower sustainability cost, the Typhoon Mk-30c is the most economical naval gun system in its class. The embedded trainer, which is an integral part of each system, minimizes the need for special training facilities and enhance the operators skill level without additional costs.

The Typhoon Mk-30c provides for crew-safe conditions with a remote operation console located in the CIC, on the bridge, or on other protected ship areas.

Adaptability Due to its compact design and low weight, the Typhoon Mk-30c can be applied to a wide range of ship classes. It can be used as a main gun to patrol boats or as a secondary gun, in AT/FP missions for large vessels. 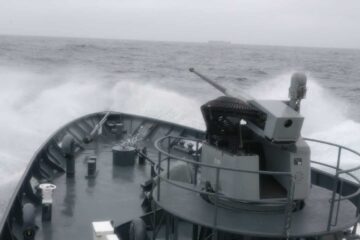