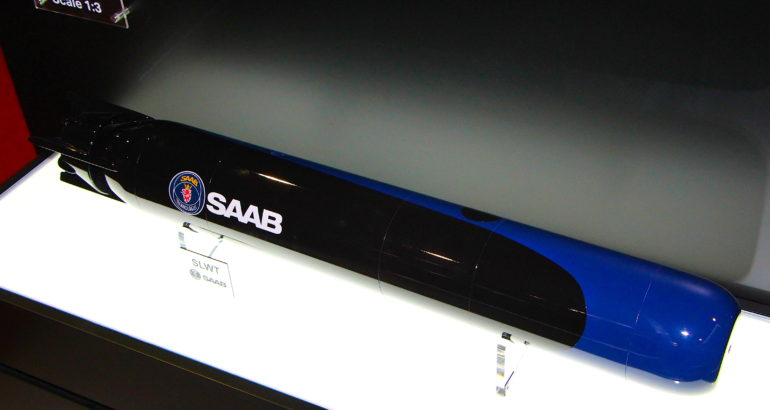 Saab’s Lightweight Torpedo System (SLWT) is under the spotlight at this year’s IMDEX Asia maritime exhibition. The SLWT is an advanced lightweight torpedo system being developed by Saab in cooperation with the Swedish Defence Materiel Administration (FMV), the Swedish Defence Research Agency (FOI) and the Swedish Armed Forces (SwAF).

In 2016, Saab signed a development contract with the FMV under the « Torpedo System 47 » program. According to the FMV timeline, development completion and production launch are expected for 2020. The Swedish Navy plans to reach SLWT IOC on its Visby-class corvettes and submarines in 2022, and FOC as of 2023.

Besides the FMV, Saab also signed a delivery contract with Finland’s Patria and FDF LOGCOM. The SLWT system will be part of the Finnish Navy’s SQ2000 MLU and SQ 2020 programs, with deliveries occurring between 2019-2025.

The SLWT differs from existing ASW systems by its capability to adapt to difficult hydro-acoustic conditions, thanks to its suitable frequency range, advanced signal processing, fully digital sonar, as well as an evolutionary HF range. Sailors will also be able to control the weapon during the engagement, due to availability of galvanic wire and evolutionary optical fiber link.

Moreover, the SLWT sensor system, that will localize and identify submarines, is tailor made for the environment in the Baltic Sea. Depending on the local environment the torpedo must have the ability to alter speed, navigate with high accuracy and communicate efficiently with the firing platform. The future torpedo will have a weight of approx. 340 kg, a range of 20 km and an endurance of around 1h. Pumpjet propulsion will be provided by LiFePO4 battery

The future SLWT is being developed as a « modular » weapon, which means that the user only has one module to change between the warhead and exercise version, otherwise it is the same torpedo. After the exercise shot, the exercise module inflates its balloon so that you can recover the torpedo from the surface.