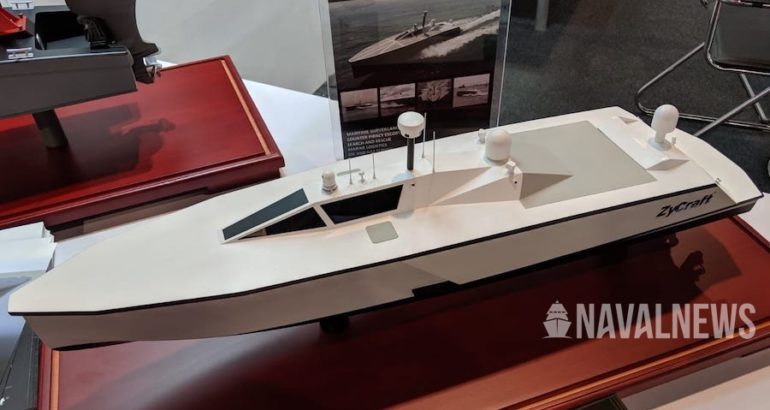 Protecting Singapore’s Exclusive Economic Zones (EEZ) might draw on bolstering the Republic of Singapore Navy (RSN) fleet of medium unmanned vessels. An approach which will explain the presence of numerous Unmanned Surface Vessels at IMDEX 2019 exhibition, being held in the city-state.

Among other solutions is the brand new Vigilant Independent Unmanned Surface Vessel (IUSV), proposed by the local company ZyCraft.

The Vigilant IUSV is fitted with a Seakeeper stabilisation system which provides anti-roll capability. This enables operations in high sea states with allowing EO/IR system and others electronic sensors to work optimally. The IUSV also features a Simrad 4G radar allowing a detection range of 24 km.

An in-house built collision avoidance software ensures the Vigilant operates safely even in congested waters. The IUSV has a 16 tons payload capacity.

ZyCraft was founded in 2011 for the purpose of developing advanced, unmanned maritime systems technologies. Besides the Vigilant IUSV, ZyCraft developed the M75 Unmanned Target Boat and a Diver Detection Sonar.

Naval News Staff 09 Sep 2022
Saab's test platform for the development of autonomous functions Enforcer III, which was converted from the Combat Boat 90, was tested in a joint trial by Saab and the Swedish Navy in the southern Baltic Sea.