The competition for Australia’s new Independent Littoral Maneuver Vessel (ILMV) known as Land 8710 Phase 1A heated up during INDO PACIFIC 2022, with several competitors showcasing their designs and concepts to replace the Army’s ancient fleet of LCM-8s.

The new vessels are expected to be significantly larger and more capable than their predecessors, boasting increased range, a steel hull and heavy-lift capabilities.

Raytheon Australia, in collaboration with shipbuilder Austal and design firm BMT, is pitching a variant of BMT’s Caimen landing craft adapted to Australian conditions. While it retains the type’s distinctive tribow monohull hull form, the vessel will not feature a stern ramp and will be built entirely of steel. If the Raytheon led team is successful, Austal will build the BMT designed vessels at its facilities in Henderson, with Raytheon managing overall systems integration. More details about this proposal can be found here.

The Australian Maritime Alliance is hoping that its new Oboe design will be selected for the requirement. The Australian Maritime Alliance is a new joint venture, made up of Serco and Civmec, formed specifically for LAND 8710A. During INDO PACIFIC 2022, Serco was displaying a 1/16th scale model of the design which recently completed tank testing, which they say proves the maturity of the design. Unlike the Raytheon offering, Oboe boasts a rear ramp, allowing more flexibility in loading cargo. If selected to replace the LMC-8s, the vessels will be built by Civmec to a design from Serco. More details here.

Australian company Birdon is also understood to be bidding for the competition, though they have released next-to-no details about their offering. 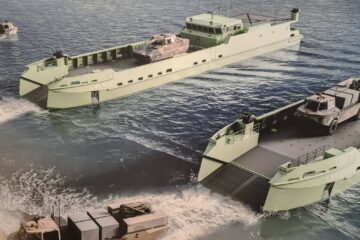